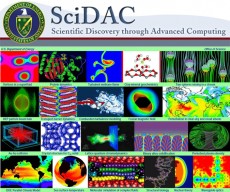 When the Department of Energy announced the series of projects under the latest Scientific Discovery through Advanced Computing (SciDAC) program in late 2017, Berkeley Lab scientists, mathematicians and computer scientists were listed as key contributors in two institutes and 10 science application partnerships. Funding for the projects is expected to be more than $6.5 million annually over the next three to five years.

The SciDAC Institutes and Partnership Projects are key components of the program. While the institutes form the foundation for efforts by applied mathematicians and computer scientists to systematically address technical challenges inherent to the scale of new architectures and common across a wide range of science problems, the partnerships enable scientists to conduct complex scientific and engineering computations at a level of fidelity needed to simulate real-world conditions in targeted science projects. A critical aspect of the SciDAC program is the collaboration between domain scientists and mathematicians and computer scientists to ensure that the applications are both scientifically accurate and computationally efficient.

“The fact that so many of these new SciDAC projects are either led by or rely on the expertise of Berkeley Lab scientists, and that the latest round of funding spans all six DOE Office of Science program offices, is a strong endorsement of our leadership in computational science,” said Esmond Ng, who heads the Applied Mathematics Department in Berkeley Lab’s Computational Research Division (CRD) and is the SciDAC point of contact for CRD.

The SciDAC program, first launched in 2001, brings together teams of some of the nation’s top researchers at national laboratories and universities to create the software and infrastructure needed to help scientists effectively utilize the next generation of supercomputers for tacking the toughest scientific challenges – some of which can only be studied through high performance computation and simulation.

Here are the 2017 SciDAC Institutes with CRD staff participation:

CRD staff are also involved in 10 SciDAC Science Partnerships that have received funding: