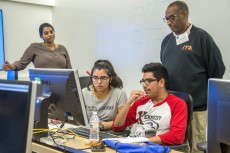 Ten students from the IT Academy at Richmond’s Kennedy High School spent the first week of their summer vacation getting hands-on experience in high-speed networking and getting first-hand advice on planning their future.

The students and IT Academy lead teacher LaRue Moore participated in the June 12-16 pilot workshop introducing them to networking for science. The five-day workshop include a 30-minute instructional presentations followed by 30 minutes of hands-on work, a sequence developed by Sowmya Balasubramanian of ESnet. Topics included configuring IP addresses, tracing packets, assessing network performance and locating bottlenecks.

On the last day, students were given the assignment: You are a network administrator. You have five Raspberry Pis that serve as data transfer nodes. They are connected to a switch that can process at 1000 megabits/second. The Raspberry Pi themselves can transfer at 100 megabits/second. A user wants to use one of the data transfer nodes and has approached you for help in finding the best node. You need to run tests to find which is the best node.

Working in teams, the students measured the round-trip time for each node and then balance speed against packet loss to determine which performed best. Students then presented their findings to the group, as they would make a recommendation to an IT expert.

“This was extremely valuable for our students and now I want to see how we can scale it up to 40 students,” Moore said. “This week has given them both more knowledge and more confidence.”

Each day over lunch, students heard from ESnet, NERSC and CRD staff about various career paths, with the common theme being that you need to take chances, apply to programs and to not always have a set plan, but learn and adapt as you go.

In her presentation about how she left a teaching position at an English university to conduct network research at ESnet, Mariam Kiran said her interest in science and engineering was spurred by science fiction movies, comics and cartoons such as Spiderman, Dino Riders and The Matrix. After spending a summer at ESnet two years ago, she applied for a permanent position and made the move across the Atlantic last year.

On the last day, students went around the table to say what they took away from the workshop. Angel thanked the presenters for their time and said he learned a lot, “I learned more than in our networking class and I want to learn more.”

Michelle said she liked hearing about all the different backgrounds of the people who work at the lab.

Victor liked the tours of the NERSC/ESnet machine room and the Advanced Light Source, especially the beamlines, as well as the message of what to expect as you go to college and beyond. “Anything can happen,” he said.

The students wrapped up the week with a Friday afternoon tour of the quantum computing lab on the UC Berkeley campus.

View a photo and video record of the event.

The workshop was organized by Esnet’s Balasubramanian and Jon Bashor of Computing Sciences communications. The program is part of an ongoing CS outreach effort with Kennedy High that started in 2010. Other staff who participated are Eli Dart, Daniel White, Inder Monga, Eric Pouyoul, Jackson Gor and Melissa Stockwell, all of ESnet; Glenn Lockwood of NERSC and Jose Sierra of the Computational Research Division.