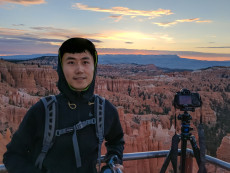 Yu-Hang “Maxin” Tang, the most recent recipient of the Alvarez Postdoctoral Fellowship, will be working to use active learning algorithms to accelerate computationally expensive scientific computations such as ab initio molecular dynamics. His work is applicable to many different kinds of systems, such as enzymes and catalysts, by improving existing molecular dynamics simulations by including the ability to model chemical reactions in addition to other physical interactions.

He will be working with the Lawrence Berkeley National Laboratory’s Computational Chemistry, Materials and Climate Group, which is a part of the Computational Research Division. He felt compelled to get a fellowship at the Berkeley Lab because the research areas are relevant to what Tang is doing while being “one of the best research institutions that brings fundamental science into solving real-world challenges.”

The Berkeley Lab Computing Sciences Alvarez Postdoctoral Fellowship program allows graduates to work on the most important research challenges in applied math, computer science, and computational science. The Alvarez Fellowship was founded in 2002 and was named after Luis W. Alvarez, a Nobel laureate in physics who was one of the first scientists to propose using computers to analyze scientific data.

Tang has a history with computational science. While getting his Ph.D. he worked on developing methods for several different simulations, including large-scale computations which were capable of simulating the interactions of one million red blood cells.

He first became interested in computational science while getting his bachelor’s degrees in polymer science from Zhejiang University in his native China. In 2011 he came to the United States and attended Brown University where he got his Ph.D. in applied mathematics. He enjoys his research because “it connects the practical world with theoretical development.”

In his free time Tang enjoys spending time outdoors doing activities such as hiking and photography. While living on the East Coast he also picked up skiing.