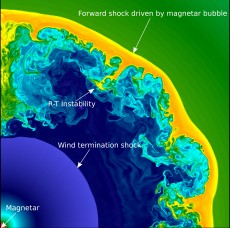 Sightings of a rare breed of superluminous supernovae—stellar explosions that shine 10 to 100 times brighter than normal—are perplexing astronomers. First spotted only in last decade, scientists are confounded by the extraordinary brightness of these events and their explosion mechanisms.

“This is the first time that anyone has simulated superluminous supernovae in 2D; previous studies have only modeled these events in 1D,” says Ken Chen, an astrophysicist at the National Astronomical Observatory of Japan. “By modeling the star in 2D we can capture detailed information about fluid instability and mixing that you don’t get in 1D simulations. These details are important to accurately depict the mechanisms that cause the event to be superluminous and explain their corresponding observational signatures such as light curves and spectra.”

Chen is the lead author of an Astrophysical Journal paper published in December 2016. He notes that one of the leading theories in astronomy posits that superluminous supernovae are powered by highly magnetized neutron stars, called magnetars 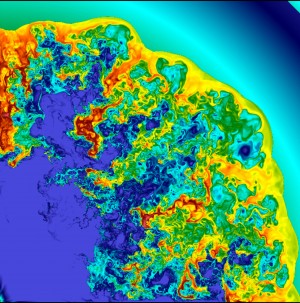 How a star lives and dies depends on its mass—the more massive a star, the more gravity it wields. All stars begin their lives fusing hydrogen into helium; the energy released by this process supports the star against the crushing weight of its gravity. If a star is particularly massive it will continue to fuse helium into heavier elements like oxygen and carbon, and so on, until its core turns to nickel and iron. At this point fusion no longer releases energy and electron degeneracy pressure kicks-in and supports the star against gravitational collapse. When the core of the star exceeds its Chandrasekhar mass—approximately 1.5 solar masses—electron degeneracy no longer supports the star. At this point, the core collapses, producing neutrinos that blow up the star and create a supernova.

This iron core-collapse occurs with such extreme force that it breaks apart nickel and iron atoms, leaving behind a chaotic stew of charged particles. In this frenzied environment negatively charged electrons are shoved into positively charged positrons to create neutral neutrons. Because neutrons now make up the bulk of this core, it’s called a neutron star.

In addition to being insanely dense—a sugar-cube-sized amount of material from a neutron star would weigh more than 1 billion tons—it is also spinning up to a few hundred times per second. The combination of this rapid rotation, density and complicated physics in the core creates some extreme magnetic fields. 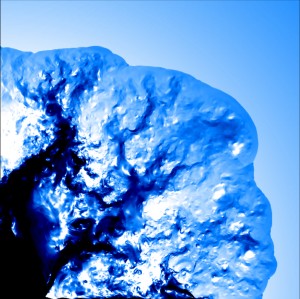 The magnetic field can take out the rotational energy of a neutron star and turn this energy into energetic radiation. Some researchers believe this radiation can power a superluminous supernova. These are precisely the conditions that Chen and his colleagues are trying to understand with their simulations.

“By doing a more realistic 2D simulation of superluminous supernovae powered by magnetars, we are hoping to get a more quantitative understanding about its properties,” says Chen. “So far, astronomers have spotted less than 10 of these events; as we find more we’ll be able to see if they have consistent properties. If they do and we understand why, we’ll be able to use them as standard candles to measure distance in the Universe.”

He also notes that because stars this massive may easily form in the  early  cosmos, they could provide some insights into the conditions of the distant Universe.

“To do multi-dimensional simulations of superluminous supernovae you need supercomputers (a large amount of computing power) and the right code (including relevant microphysics). It proposes a numerical challenge for such simulations, so this event has never been modeled in 2D before,” says Chen. “We were the first ones to do it because we were we were lucky to have access to NERSC resources and the CASTRO code.”