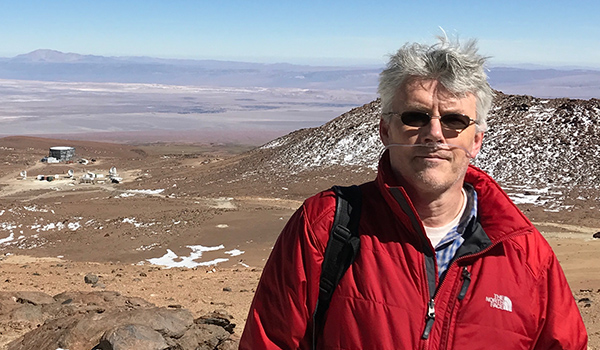 Julian Borrill in Chile's Atacama Desert with the POLABEAR and ACT telescopes in the background. (Photo Courtesy of Julian Borrill, Berkeley Lab)

Physicists around the world have drafted plans for a next-generation ground-based experiment to study the Cosmic Microwave Background – the faint relic radiation from the Big Bang.

Known as CMB-S4, the experiment’s preliminary design comprises three 6-meter and 14 half-meter telescopes distributed across sites in Antarctica and Chile. Fielding 500,000 detectors, it will be more than 10 times more sensitive than all existing experiments combined. With these new telescopes, researchers believe they can measure the energy scale of inflation (when the infant Universe underwent a brief period of explosive expansion), determine the number of neutrino species and their total mass, constrain the nature of dark matter and dark energy, and help understand the formation and evolution of galaxies.

But achieving these ambitious goals will require expertise and support from a range of universities and federal scientific research agencies, including the U.S. Department of Energy (DOE) and National Science Foundation (NSF). Last month, the collaboration elected two spokespeople—Lawrence Berkeley National Laboratory’s (Berkeley Lab’s) Julian Borrill and University of Chicago’s John Carlstrom—to help garner federal support for CMB-S4 and lead the effort to bring the project to fruition with the goal of having the telescopes up and running within the next decade. Borrill also has a joint appointment at UC Berkeley's Space Sciences Laboratory, while Carlstrom has a joint appointment at Argonne National Laboratory (ANL).

“Being elected co-spokesperson is a tremendous honor. CMB-S4 is intended to be the definitive ground-based CMB project, but it will present enormous engineering and data challenges,” says Borrill, who leads the Computational Cosmology Center (C3) in Berkeley Lab’s Computational Research Division. “Together John and I embrace the full dimensions of this project. John is a university-based experimentalist who has worked with the Antarctic CMB experiments, while I am a Berkeley Lab-based computational cosmologist who has managed massive CMB datasets from space-based missions like Planck, as well as ground-based experiments in the Atacama.”

According to Borrill, Berkeley Lab’s long history in CMB research, detector development, high performance computing, data management and distributed science will be a great asset to CMB-S4. He notes that the computing and network capabilities of DOE Office of Science user facilities, including the National Energy Research Scientific Computing Center (NERSC)  and Energy Sciences Network (ESnet), both located at Berkeley Lab, and the Argonne Leadership Computing Facility (ALCF) at ANL, as well as NSF’s eXtreme Science and Engineering Discovery Environment (XSEDE), will all be integral to the success of CMB-S4.

Additionally, he credits a recent Laboratory Directed Research and Development (LDRD) project with getting the CMB-S4 collaboration to the point where the collaborators can begin to make realistic projections of what the experiment can realistically do. This will be instrumental in making the case for federal agencies to support the project.

“That recent LDRD was critical to get us to the point where we can generate realistic synthetic data sets. The C3 team are the only people with both the software and cycles to model the experiment with the necessary level of complexity and scale,” says Borrill, who leads the project.

Interestingly, Borrill notes that he was brought to Berkeley Lab more than two decades ago with LDRD funding to help Berkeley Lab Astrophysicist George Smoot map faint variations in the temperature of the CMB on supercomputers at NERSC, using data collected from the BOOMERanG and MAXIMA balloon experiments. Smoot was awarded a Nobel Prize in Physics for his work on the COBE satellite in 2006, and in 2016 Borrill was awarded the NASA Exceptional Public Achievement Medal for conceiving and implementing the mission-critical high performance computing system for the Planck CMB satellite mission.

“Berkeley Lab has made significant LDRD investments in detectors, readout and cryogenic polarization modulators for CMB-S4, in addition to an LDRD for CMB computing, and we are eager to see the project achieve CD-0 and progress towards construction followed by exciting discovery science in the next decade,” says Natalie Roe, Director of Berkeley Lab’s Physics Division.

“Julian’s election as co-spokesperson for the CMB-S4 experiment is a fitting recognition of his decades of leadership in developing and deploying the high performance computing tools needed to analyze the large datasets generated by CMB experiments,” says Horst Simon, Berkeley Lab Deputy Director.

Simon recognized the computational challenge of analyzing the massive datasets generated by CMB experiments early on and brought Borrill to Berkeley to help researchers like Smoot utilize supercomputers at NERSC to analyze their data. Since then, Borrill has played an integral role in conceptualizing and executing data management and analysis strategies for multi-agency projects like the Planck satellite, POLARBEAR ground-based and BOOMERanG and MAXIMA balloon missions. Simon notes that this extensive experience makes him an ideal leader to usher in a new era of CMB research as co-spokesperson for CMB-S4.