Jon Bashor Retires After 27 Years of Service to National Labs

The way he tells it, Jon Bashor fell into a science communications career when he landed a job at Lawrence Livermore National Laboratory in 1991. But talk to him a bit more and it becomes clear why he stayed for nearly three decades. He fell in love—with the science, the people and the mission of the national labs. 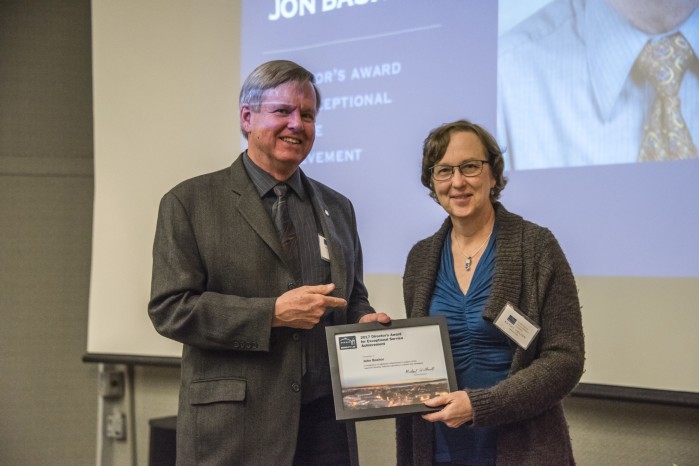 What really struck me was the intellectual capital,” said Bashor. “Thousands of smart people working on amazing projects, it can be overwhelming, but it’s really inspiring. The stuff they come up with is mind boggling.”

On April 6, Bashor retires after 27 years with the national lab system, 21 of those at Berkeley Lab promoting computing, networking and mathematics.

"As communications manager, Jon has been key to the visibility of Berkeley Lab’s computing program, both through written articles and other material produced by Jon and his team and his community leadership—including several years of organizing the DOE booth at SC, the annual supercomputing conference,” said Associate Lab Director Kathy Yelick.

“Beyond that, he has been very active in outreach and community building, not only with local high schools, but also within the lab itself, creating STEM workshops for kids, creating and co-chairing an employee resource group to advocate for a more accessible campus and much more,” Yelick continued.

For his career-long efforts, Bashor was recently recognized with a 2017 Berkeley Lab Director’s Award for Exceptional Achievement.

“I love this job. I love the people. I’m just tired of coming to work everyday,” chuckles Bashor, who intends to step up his volunteer work with Kennedy High School’s IT Academy, the Friends of El Cerrito Library and the Turnabout thrift shop after retirement. “There might also be some days I just stay home and pet my cat,” he said.

Bashor was hired at Berkeley Lab in 1997 by then NERSC Director Horst Simon. During the job interview, he recounts, Simon asked him to name one important thing that happened in high-performance computing (HPC) over the last year. Bashor, who still describes himself as “the least technical person in the room,” could only summon up the recent death of HPC pioneer Seymour Cray, of Cray Computer fame. That was enough to seal the deal, “because nobody else [applying for the job] could come up with even that,” he laughed.

But technical knowledge isn’t what made Bashor successful, said Simon: “He is a keen and witty observer. That’s what made him successful as a communicator,” and a lot of fun to work with.

It was Simon who encouraged Bashor to keep a “book of quotes,” funny (sometimes Dilbertian) utterances encountered in the line of duty. Simon shared one of his own: “It’s nobody’s responsibility, so it becomes everybody’s panic.” In the same spirit, Bashor also jokingly signs all his emails “Tam difficile non debet,” schoolboy Latin for “It shouldn’t be that difficult.”

Still, Bashor has taken his role as an advocate for the national labs very seriously. In 2016, he was asked to organize the computing portion of National Lab Day, an educational expo held for Congress, where he was photographed in the rear of a group with U.S. Secretary of Energy Ernest Moniz: “I think that particular photo reflects the nature of our job: to work behind the scenes and help researchers—or a DOE secretary—to be recognized for their work,” Bashor said.

Some of Bashor’s most enduring contributions, however, come from the many personal connections he’s made at the lab and beyond.

His collaboration with Kennedy High School’s IT Academy, for instance, has grown from offering NERSC tours and resume-writing advice into daylong “big data” workshops that give kids from disadvantaged and underrepresented backgrounds exposure to STEM careers. 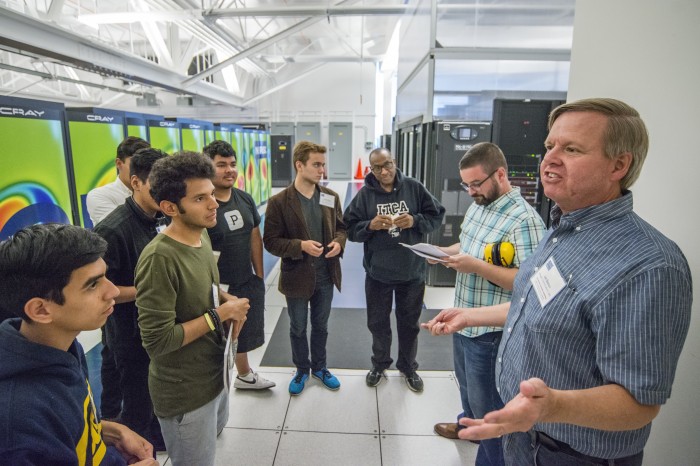 Jon Bashor (right) gives a tour of the NERSC machine room to Kennedy High School IT Academy students as part of a workshop that grew out of his volunteer efforts with the school.

“That’s worth a lot, because you can’t imagine going to college and having an IT career when everyone you know goes to work after high school,” said Jose Sierra.

He should know. Sierra was one of those Kennedy High kids introduced to the lab by Bashor. After working at the lab as a summer intern, then as a part-time computer systems engineer, Sierra recently graduated San Francisco State University with a computer engineering degree and accepted a full-time position in operations at NERSC.

Not only did Bashor help Sierra make the right contacts to land that first internship, but “when I had my doubts about being able to perform at a professional level, Jon kept encouraging me to believe in myself and pursue a higher education,” said Sierra. “My career started because of Jon’s friendliness and his belief in me.”

Another friendship, with Sandia computer scientist Jeanine Cook, opened Bashor’s eyes to physical accessibility issues and inspired him to help start an employee resource group (ERG) dedicated to improving accessibility at the lab. Cook, in turn, helped launch the ERG with a well-received talk given with Bashor in interview format.

Jon Bashor (right, back row) with the “Diamond Dogs,” a Berkeley co-ed softball team he coaches.

Then there are the just-plain-fun connections. Bashor coaches a Berkeley co-ed softball team that grew out of a lab softball league team more than 15 years ago. “We are competitive, but we’re not jerks about it,” he said of his Diamond Dogs (only Bashor recalls it was named after a David Bowie LP). After the games, everyone retires to Lanesplitter Pizza and Pub for pies and brews where Bashor has, naturally, made friends of the staff and manager.

“I like making connections and I think I’m good at it,” said Bashor. Judging by his post-retirement plans, he’s going to keep on doing what he’s good at.

For starters, he’s serving as communications chair for Friends of El Cerrito Library and the Turnabout thrift store, which funds dental and orthodontia care for East Bay kids in need. He’s also developing a study module for the Kennedy High School IT Academy. And, for all our sakes, let’s hope he keeps on making big, delicious batches of plum jam to share.