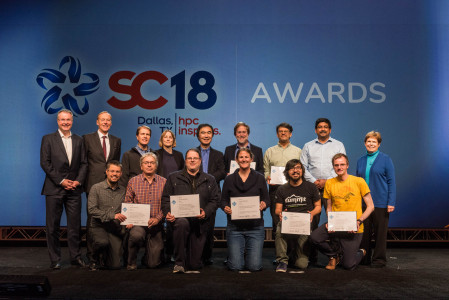 A team of researchers led by Berkeley Lab and another led by Oak Ridge National Laboratory shared the 2018 ACM Gordon Bell Prize, announced November 15 during the SC18 conference in Dallas, Texas.

Climate scientists rely on some of the fastest computers in the world to run high-fidelity simulations, but those simulations produce massive amounts of data that create their own computational challenge. The team used the fastest computer in the world, ORNL’s Summit system, to apply deep learning methods to extract detailed information from climate data produced at NERSC. Rather than computing simple quantities such as average global temperature, these methods discover and locate features like hurricanes and atmospheric rivers, which are important in characterizing extreme weather patterns and their impact.

“We are thrilled to be honored with the SC18 Gordon Bell Prize for our efforts in scalability and time to solution,” said Prabhat, who leads the Data & Analytics Services team at NERSC and was a co-author on the Gordon Bell submission. “The team from NERSC, NVIDIA and OLCF put in a tremendous amount of effort over eight months to develop this application from scratch. Achieving an exaop-level performance required significant innovation across the entire stack, and this result is a testament to the quality of the team and the capabilities of Summit.”

Summit is an IBM system powered by more than 9,000 IBM POWER9 CPUs and 27,000 NVIDIA® Tesla® V100 Tensor Core GPUs. By tapping into the specialized NVIDIA Tensor Cores built into the GPUs at scale, the researchers achieved a peak performance of 1.13 exaops and a sustained performance of 0.999 – the fastest deep learning algorithm reported to date.

“We’ve entered a new era in high performance computing, one in which exaflop performance is a reality,” said Michael Houston, a senior distinguished engineer of deep learning at NVIDIA who led NVIDIA’s research team on the climate analytics project with Berkeley Lab. “Partnering with the best minds in high performance computing at Berkeley Lab and ORNL, we demonstrated how tens of thousands of NVIDIA V100 Tensor Core GPUs on Summit can achieve breakthrough, exascale levels of performance to tackle the world’s most pressing problems.”

While deep learning is a well-established tool for problems like image analysis, its use as a tool in scientific discovery, and especially complex data sets like climate data, is relatively new.

“This project was particularly impressive from a software perspective, in that we utilized a high-productivity framework like TensorFlow, to scale deep learning code on up to 4,560 Summit nodes,” said Thorsten Kurth, application performance specialist at NERSC, and lead author on the Gordon Bell paper. “Our performance enhancements are not hardwired to the climate application, but can be generally applied to other scientific deep learning applications that require extreme scaling. Our project has hopefully provided a blueprint for AI+HPC projects for the future."

They share this year’s award with another team led by ORNL that was recognized for its work in leveraging population-scale genomic datasets and algorithmic advances to uncover hidden networks of genes at incredible speeds. This project included contributions from Berkeley Lab’s Kjiersten Fagnan, chief informatics officer for the Joint Genome Institute. This group also did its computing on ORNL’s Summit system at the Oak Ridge Leadership Computing Facility (OLCF).

The award was presented November 15 during the SC18 conference in Dallas, Texas. Established more than three decades ago by the Association for Computing Machinery, the ACM Gordon Bell Prize tracks the progress of parallel computing and rewards innovation in applying high performance computing to challenges in science, engineering, and large- scale data analytics

Both NERSC and OLCF are DOE Office of Science User Facilities.

Read the DOE release about these achievements here.