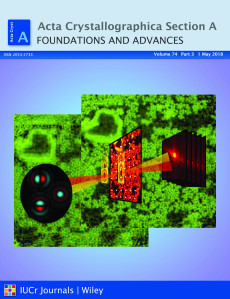 A paper describing the GDP-ADMM algorithm was the cover article in the May 2018 issue of Acta Crystallography Section A.

In scientific experiments, ptychographic x-ray imaging is primarily used to characterize the structure and properties of matter and materials. While the method has been around for some 50 years, broad utilization has been hampered by the fact that the experimental process was slow and the computational processing of the data to produce a reconstructed image was expensive.

But in recent years advances in detectors and x-ray microscopes at light sources such as Berkeley Lab’s Advanced Light Source (ALS) have made it possible to measure a ptychographic dataset in seconds. As a result, today ptychography is used in a range of scientific domains, including condensed-matter physics, cell biology and electronics.

In practice, x-ray ptychography works by focusing a beam of x-rays onto a spot in a sample. The scattering from the sample is recorded in the far field, and the recorded pattern is then phased to obtain the final image. The highest resolution attainable is not limited by the size of the focal spot, only by the numerical aperture and wavelength used. The phasing procedure in ptychography uses the overlap between consecutive exposures of the sample, plus the recorded far-field diffraction patterns, to reconstruct a high-resolution image of the sample.

As a result, reconstructing ptychographic datasets can be a data-intensive challenge that involves solving a difficult phase-retrieval problem, calibrating optical elements and dealing with experimental outliers and “noise.” To address this challenge, Berkeley Lab scientists developed SHARP (scalable heterogeneous adaptive real-time ptychography), an algorithmic framework and computer software that enables the reconstruction of millions of phases of ptychographic image data per second. Since being introduce in 2016, SHARP has had a demonstrable impact on productivity for scientists working at the ALS and other light sources across the Department of Energy complex, with notable successes in the analysis of magnetic thin films, magnetozomes and 3D battery materials.

A paper describing GDP-ADMM was the cover article in the May 2018 issue of Acta Crystallography Section A. GDP-ADMM allows more light to be used, opening the entrance slits of a ptychographic microscope and reducing the number of frames required to obtain enough data to reconstruct a meaningful image. The publication details how GDP-ADMM and partial coherence analysis help overcome stability issues inherent in coherent ptychographic imaging experiments, which often discard the majority of flux from a light source to define the coherence of an illumination (localized coherent x-ray probe). It also exploits translational kernel separability to speed analysis.

“The goal was to offer the ability to quickly discover interesting nanoparticles at full resolution by enabling rapid feedback from the microscopists at the beamlines,” said Stefano Marchesini, a staff scientist in CRD and co-author on the Acta paper. “Even when the next-generation coherent light sources come online, we may be able to extend the x-ray energies that can be used in ptychography by using this model.”

Other CRD staff involved with this work include Huibin Chang and Pablo Enfedaque, co-authors on the Acta paper with Yifei Lou of UT Dallas; Hari Krishnan, also from CRD; and Bjoern Enders, Kasra Nowrouzi and David Shapiro of the ALS, who all helped with the implementation at the beamlines.

The ALS is a DOE Office of Science User Facility.