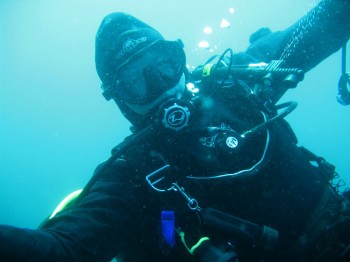 As a network engineer for the Department of Energy’s ESnet (Energy Sciences Network), Michael Blodgett will be supporting the operation of the world’s fastest network for science. His daily tasks will include network configuration automation and equipment deployments.

Before coming to Berkeley Lab, Blodgett spent much of his time working in academia. He was first exposed to network engineering in college when he supported the University of Wisconsin-Madison’s (UW-Madison’s) Computer Sciences department network. After graduating, he took a full-time job with the university’s computer science department, working in the Wisconsin Advanced Internet Laboratory. When the Morgridge Institute for Research began building a new facility on the UW-Madison campus, Blodgett worked on designing and deploying a network for a building that didn’t even have all of its walls in place.

“Building a network from ground up is a challenge, but it exposed me to more of the process behind larger projects,” he says. “Working in the Network Services group in the University of Wisconsin-Madison Department of Information Technology, gave me a lot of experience in deploying and operating equipment on a wider scale. Being part of the ESnet team allows me to extend that experience to a now even larger scale.”

Blodgett is originally from Manitowoc, Wisconsin, and notes that his interest in engineering sparked when his dad introduced him to computers as a child. Later as a teenager, he did a lot of technical work in the theater and concert realm which involved quite a bit of troubleshooting. Although he’s always been interested in the hardware side of computing, he notes that his first college job required someone to “run the network” and the job stuck with him. In 2000, he moved to Madison for college and has been living there ever since. In fact, Blodgett will work for ESnet remotely from Madison.