Lawrence Berkeley National Laboratory’s growing expertise in the application of deep learning and other machine learning methods to the study of extreme weather events is gaining international attention. Staff from Berkeley Lab’s National Energy Research Scientific Computing Center (NERSC) and Earth and Environmental Sciences Area (EESA) were invited to give talks and present posters at the 2019 International Meeting on Statistical Climatology (IMSC) June 24-28 in Toulouse, France, a prestigious event held every three years since 1979. And  this was the first year that included a statistical machine learning session, co-chaired by Michael Wehner, a senior staff scientist in Berkeley Lab’s Computational Research Division who specializes in the study of extreme weather and extreme climate. 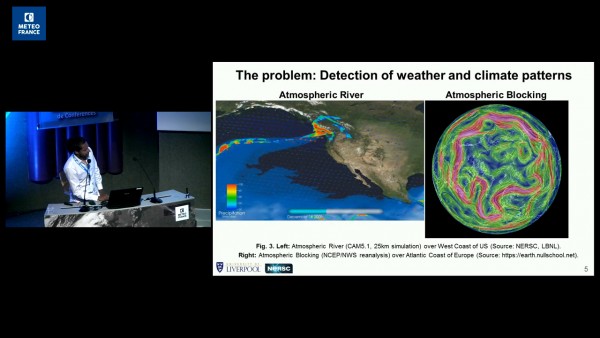 Karthik Kashinath, a computer scientist and engineer at NERSC, delivered a well-received keynote at the IMSC 2019 meeting in Toulouse, France, June 24-28.

“In my opinion, Berkeley Lab is at the forefront of using machine learning techniques to study climate science because of our access to NERSC supercomputers and other DOE leadership machines, as well as talented mathematicians and statisticians,” Wehner said. “Our work was very well received at the IMSC.”

Wehner, who earned his master’s and PhD in nuclear engineering, first attended the conference in 1998 and says it was a life-changing experience. “While I was there I heard a talk about extreme value theory, and during one of the receptions I started asking some of the speakers about this theory and they referred me to a textbook that I had to read multiple times before I fully understood it. It really cemented in my mind how to apply extreme value statistics to climate,” he said. “So for me that first IMSC was a watershed conference.”

Karthik Kashinath, a computer scientist and engineer at NERSC who leads a number of climate science projects through the Big Data Center collaboration, attended the IMSC meeting this year for the first time. While there he delivered an invited keynote address, “Topological data analysis and machine learning methods for pattern detection in spatiotemporal climate data,” on behalf of PhD student Grzegorz Muszynski, a student assistant at NERSC who could not attend the meeting; gave a talk on “Deep learning recognizes weather and climate patterns”; and presented two posters: “Physics-informed generative learning to emulate unresolved physics in climate models” and “A statistical framework for modeling tropical cyclone genesis and assessing differences in basins and climates,” both of which showcased research done in conjunction with interns and graduate students in Berkeley Lab’s Computing Sciences area.

“This was the first year Berkeley Lab presented multiple papers and posters on the application of machine learning in climate at this conference,” Kashinath said. “But we have already established ourselves as leaders in this branch of climate science.” Muszynski’s keynote, for example, was the fourth invited talk NERSC researchers have given on this topic in the past year, including at the 2019 American Geophysical Union and American Meteorological Society annual meetings. And since the IMSC meeting, Kashinath has been invited to present their work at the "Machine learning for weather and climate modeling" workshop at Oxford University and the "Big data and machine learning for climate science" symposium at the 2019 US CLIVAR Summit.

Also attending IMSC 2019 from Berkeley Lab were Chris Paciorek, statistical lead for the Lab’s CASCADE Scientific Focus Area and the statistical computing consultant in the Department of Statistics at UC Berkeley, who chaired the IMSC Event Attributions session and gave a talk on “Statistical methods and software for extreme value analysis and quantifying uncertainty in extreme event attribution”; and Mark Risser, a statistician in EESA who is working with Paciorek and EESA climate expert Bill Collins.

“It has taken almost a whole generation for statistical climatology to become its own discipline, and it is still early days,” said Wehner, who has attended four IMSC conferences and has noticed that more than half the meeting is now devoted to climate and weather extremes. “But climate is the statistics of weather. We need more advanced statistics methods like machine learning and people who are trained in statistics in climate science, and this is where Berkeley Lab shines, by bringing people from multiple disciplines to this field.”