Scientists know that extreme pressure exists inside a proton — pressure far stronger than even that inside a neutron star. However, until recently, they haven’t understood much about pressure distribution inside the proton. For the first time, lattice quantum chromodynamics (LQCD) calculations run at Lawrence Berkeley National Laboratory’s National Energy Research Scientific Computing Center (NERSC) allowed nuclear physicists from the Massachusetts Institute of Technology (MIT) to determine the pressure distribution inside a proton, taking into account the contributions of the proton’s fundamental particles: quarks and gluons. This discovery brings nuclear scientists closer to a complete understanding of a proton’s structure and the fundamental particles that make up most of the visible matter in the universe. 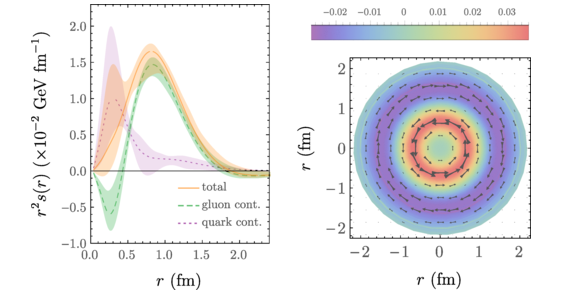 Quarks and gluons are the fundamental particles that form the complex structure of the proton, but until now scientists have been able to discern much more about quarks than gluons. Since quarks carry an electric charge, they can be studied using electron scattering experiments. Gluons don’t carry electric charge and have been much more difficult to research. However, plans for a new type of accelerator, an electron ion collider, would allow the gluonic structure of protons to be probed in much greater depth.

“The role of gluons was essentially unknown prior to this research,” said Phiala Shanahan, an MIT assistant professor who co-led the research. “It’s particularly interesting because this is something that may be able to be measured within the next 10-15 years with the likely construction of an electron ion collider.”

For now, scientists rely on LQCD and high performance computing to study these aspects of research on proton structure. LQCD calculations create snapshots of what the quarks and gluons are doing inside a proton. From those snapshots, researchers are then able to extract the physics they’re seeking. “The task of creating those snapshots is a very computationally demanding one,” said William Detmold, an associate professor at MIT who co-led this research. “What we are calculating is what an observer would see if they jumped inside a proton.”

NERSC’s Cori supercomputer was instrumental to this research. “It was a massive, large-scale computational task, both in terms of simulation and data analysis,” said Shanahan. “Our calculations need to run on many nodes at once; it would not have been possible to do these calculations using smaller resources.”

There are still a number of systematic uncertainties that have not been estimated, the most significant being that we did these calculations with heavier quarks than in nature so that the required computational resources could be reduced, he added.  “We have theoretical reasons to expect that this will be a small systematic effect, but actually doing the calculations with the physical values of the quark masses is the next step, which will require more computational power."