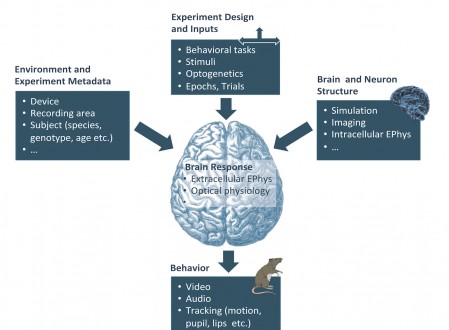 NWB:N supports storage and use of data from complex neurophysiology experiments and enables collaboration and sharing, reuse, and reproduction of data and analysis across teams and projects. Images: Ryan Ly, Lawrence Berkeley National Laboratory

The Neurodata Without Borders: Neurophysiology (NWB:N) project, led by Lawrence Berkeley National Laboratory (Berkeley Lab) in collaboration with the Allen Institute for Brain Science and multiple neuroscience labs, has been selected for a 2019 R&D100 Award by R&D World magazine.

Originally launched in 2014, NWB:N is a data standard for neurophysiology research that provides neuroscientists with a software ecosystem that enables them to share, archive, use, and build tools for analyzing data, ensuring the success of brain research worldwide and accelerating the pace of scientific discovery.

Understanding how the brain works and gives rise to thoughts, memories, perception, and consciousness remains one of the greatest challenges in science. To tackle this challenge, neurophysiologists run experiments that measure neuronal activity from different parts of the brain and relate that activity to sensation and behavior. These experiments generate large, complex, and diverse datasets at terabyte scale, and the size and complexity of these datasets are expected to grow significantly under recent global investments in neuroscience research, such as the BRAIN Initiative and the E.U. Human Brain Project.

With this massive growth of data comes the need for efficient, standardized mechanisms for storing, analyzing, and sharing data. However, unlike other fields such as genetics and astronomy, neurophysiology has not had a standard data format. This has made collaboration across laboratories inefficient, direct comparison of findings difficult, and re-use of rich data almost impossible, significantly slowing overall progress in the field.

This disconnect is what prompted researchers from Berkeley Lab, the Allen Institute, Vidrio Technologies, UC Berkeley, and the broader research community to develop NWB:N, which enables the re-use of data, facilitates collaboration across laboratories, and makes high performance computing easily accessible to neuroscientific research. The NWB:N consortium was initiated by The Kavli Foundation in mid-2014 following the National Institutes of Health’s announcement of the BRAIN Initiative. Berkeley Lab’s leadership in the project evolved out of a Laboratory Directed Research and Development project, BRAINformat: A Data Standardization Framework for Neuroscience Data. 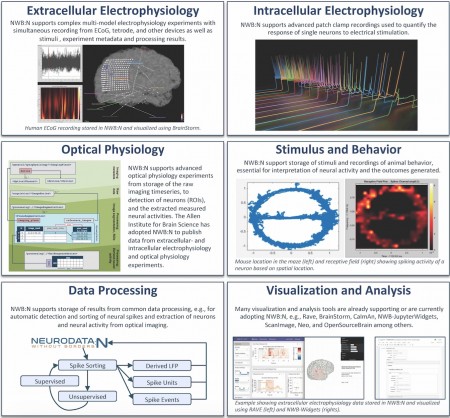 Some of the many neurophysiology applications supported by NWB:N.

“NWB:N fills a critical gap in the neuroscience research community by providing not only a data standard but a rich software ecosystem surrounding the standard,” said Oliver Rübel, a staff scientist in the Computational Research Division’s (CRD’s) Data Analytics and Visualization Group and an NWB:N principal investigator. Unlike other data formats, NWB is open-source, free to use, supports the full scope of neurophysiology experiments, and is optimized for storing and analyzing the increasingly large datasets being generated today.

As compute lead for OpenMSI, Rübel was also part of the Berkeley Lab-led team that won an R&D100 award in 2015 for OpenMSI, the most advanced web-available tool for analyzing and visualizing mass spectrometry instrument data.