Searching for Photocathodes that Convert CO₂ into Fuels 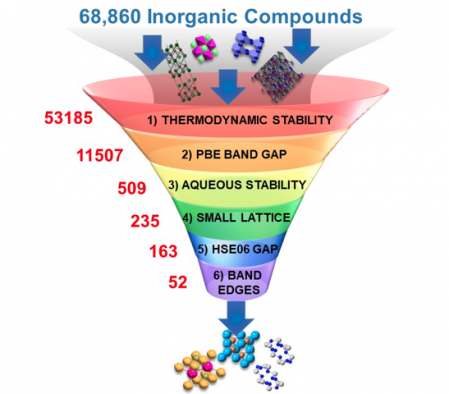 Six-step selection criteria used in the search for photocathodes for CO2 reduction. The search began with 68,860 inorganic compounds. The number of materials that satisfied the requirements of each step is shown in red, with 52 meeting all the requirements.

Carbon dioxide (CO2) has a bad reputation due to its pivotal role in the greenhouse gas effect at the Earth’s surface. But scientists at the Joint Center for Artificial Photosynthesis (JCAP), a U.S. Department of Energy (DOE) Innovation Hub, view CO2 as a promising solution to clean, low-cost, renewable energy.

JCAP is a team led by the California Institute of Technology (Caltech) that brings together more than 100 world-class scientists and engineers, primarily from Caltech and its lead partner, Lawrence Berkeley National Laboratory (Berkeley Lab).

The JCAP team is developing new ways to produce transportation fuels from CO2, sunlight, and water using a process called artificial photosynthesis, which harvests solar energy and stores it in chemical bonds. If successful, they’ll be able to produce fuels while also eliminating some CO2 — a “win-win,” according to Arunima Singh, an assistant professor of physics at Arizona State University and a former member of the JCAP team.

Singh became involved in the research as a postdoctoral associate at Berkeley Lab, where she searched for new photocathodes to efficiently convert CO2 to chemical fuels — a major hurdle to realizing scalable artificial photosynthesis.

“There is a dire need to find new materials to enable the photocatalytic conversion of CO2. The existing photocathodes have very low efficiencies and product selectivity,” said Singh. “Previous experimental attempts found new photocatalytic materials by trial and error, but we wanted to do a more directed search.”

Using supercomputing resources at the National Energy Research Scientific Computing Center (NERSC), the Berkeley Lab team performed a massive photocathode search, starting with 68,860 materials and screening them for specific intrinsic properties. Their results were published in the January issue of Nature Communications.

“The candidate materials need to be thermodynamically stable so they can be synthesized in the lab. They need to absorb visible light. And they need to be stable in water under the highly reducing conditions of CO2 reduction, ” said first author Singh. “These three key properties were already available through the Materials Project.”

The Materials Project is a DOE-funded database of materials properties calculated based on predictive quantum-mechanical simulations using supercomputing clusters at NERSC, which is a DOE Office of Science User Facility. The database includes both experimentally known materials and hypothetical structures predicted by machine learning algorithms or various other procedures. Of the 68,860 candidate materials screened in the Nature Communications study, about half had already been experimentally synthesized, while the remaining were hypothetical.

The researchers screened these materials in six steps. First, they used the Materials Project to identify the materials that were thermodynamically stable, able to absorb visible light, stable in water, and electrochemically stable. This strategy reduced the candidate pool to 235 materials — dramatically narrowing the list for the final two steps, which required computationally intensive calculations.

“By leveraging a large amount of data already available in the Materials Project, we were able to cut the computational cost of the project by several millions of CPU hours,” said Kristin Persson, a faculty scientist in Berkeley Lab’s Energy Technologies Area and senior author on the paper.

However, the Materials Project database did not have all the necessary data. So the final screening required new first-principles simulations of materials properties based on quantum mechanics to accurately estimate the electronic structures and understand the energy of the excited electrons. These calculations were computed at NERSC and the Texas Advanced Computing Center (TACC) for the remaining 235 candidate materials.

“NERSC is the backbone of the Materials Project computation and database. But we also used about two million NERSC core hours to do the step 5 and 6 calculations,” said Singh. “Without NERSC, we would have been running our simulations on 250 cores for 24 hours a day for a year, versus being able to do these calculations in parallel on NERSC in a matter of a few months.”

The team also used about half a million core hours for these calculations at TACC, which were allocated through the National Science Foundation’s Extreme Science and Engineering Discovery Environment (XSEDE).

These theoretical calculations showed that 52 materials met all of the stringent requirements of the screening process, but that only nine of these had been previously studied for CO2 reduction. Among the 43 newly identified photocathodes, 35 have previously been synthesized and eight are hypothetical materials.

Finally, the researchers narrowed the list down to 39 promising candidates by looking at the vibrational properties of the eight hypothetical materials and ruling out the four predicted to be unstable by themselves.

However, more work is needed before artificial photosynthesis becomes a reality, including working with their experimental colleagues like Caltech’s John Gregoire (a leader of JCAP’s high-throughput experimentation laboratory) to validate their computational results.

“We have collaborators at Berkeley Lab and Caltech who are actively trying to grow these materials and test them,” Singh said. “I’m excited to see our study opening up new avenues of research.”

Jennifer Huber is a freelance science writer and science-writing instructor. Her work has appeared in KQED Science, Berkeley Engineer, and Scope, among other publications.