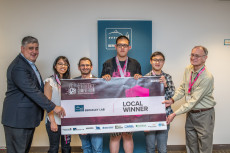 “CyberForce brings together our nation’s brightest students to protect against tomorrow’s threats, a uniquely American approach to problem solving,” said Secretary of Energy Rick Perry. “These competitions identify and honor tomorrow’s cybersecurity experts to encourage their continued work in a vital field. Congratulations to this year’s winners and thank you to all the bright students who participated.”

The CyberForce Competition was established in 2014 to address the cybersecurity capability gap in the U.S. by bringing together hundreds of college students to compete at multiple DOE national laboratories. Through this popular event, the DOE has increased hands-on cyber education for college students and professionals, awareness of the critical infrastructure and cybersecurity nexus, and basic understanding of cybersecurity in a real-world scenario.

“Every year, the CyberForce Competition attracts more and more talented students, and with the expansion to address professional recruitment, the competition will only continue to grow,” said Karen S. Evans, Assistant Secretary for DOE's Office of Cybersecurity, Energy Security, and Emergency Response. “We envision this competition to be a tool to assist our sector to close skills gaps and shortage of cybersecurity experts.”

“One of my favorite things about DOE’s CyberForce competition is that it forces you to think outside the box because you can’t just deny all and enable the secure versions of services - you have to find other creative ways to secure your environment whether that’s enabling virtual hosts and disabling reverse DNS Lookup, setting up a honeypot with executables or something else,” said UC Davis’s Shannon Hui Ling Chee.

The 2019 event challenged teams to defend one of four realistic system scenarios—an energy company’s solar generation facility, electric substation, high performance computing center, or manufacturing plant—while communicating with the other three infrastructures to monitor and maintain the integrity of the system as a whole. Each team was scored on its ability to safeguard against attacks while ensuring the system’s usability. The Berkeley Lab competition focused on defending a high performance computing data center.

The competition also helps students develop teamwork and technical skills needed to succeed in future cyber roles. Known as the Blue Teams, they engage in interactive, energy-focused scenario activities centered on cybersecurity methods, practices, strategy, policy, and ethics – all while defending their network against a team of “hackers” (the Red Teams) played by security professionals and government representatives. The competition enhances competitors’ experiences by using specific energy sector-focused scenarios that include simulations of realistic threats faced in the sector today.

"At NERSC, we've had cybersecurity positions opened for a year because there aren't that many qualified applicants. So, it's great to see so many students, especially women and underrepresented minorities participating in this competition," said Tina Declerck, who leads NERSC's Systems Department. "This competition is a really great opportunity for anyone that wants to go into the computing industry because you have to protect systems no matter where you are.”

The competition is co-funded by the DOE’s Office of Cybersecurity, Energy Security, and Emergency Response, Office of Electricity, Office of Science, Office of the Chief Information Officer, and the National Nuclear Security Administration.