The nebula phase of the magnetar-powered super-luminous supernova from our 3D simulation. At the moment, the supernova ejecta has expanded to a size similar to the solar system. Large scale mixing appears at the outer and inner region of ejecta. The resulting light curves and spectra are sensitive to the mixing that depends on stellar structure and the physical properties of magnetar. (Image by Ken Chen)

For most of the 20th century, astronomers have scoured the skies for supernovae—the explosive deaths of massive stars—and their remnants in search of clues about the progenitor, the mechanisms that caused it to explode, and the heavy elements created in the process. In fact, these events create most of the cosmic elements that go on to form new stars, galaxies, and life.

Because no one can actually see a supernova up close, researchers rely on supercomputer simulations to give them insights into the physics that ignites and drives the event. Now for the first time ever, an international team of astrophysicists simulated the three-dimensional (3D) physics of superluminous supernovae—which are about a hundred times more luminous than typical supernovae. They achieved this milestone using Lawrence Berkeley National Laboratory’s (Berkeley Lab’s) CASTRO code and supercomputers at the National Energy Research Scientific Computing Center (NERSC). A paper describing their work was published in Astrophysical Journal.

Astronomers have found that these superluminous events occur when a magnetar—the rapidly spinning corpse of a massive star whose magnetic field is trillions of times stronger than Earth’s—is in the center of a young supernova. Radiation released by the magnetar is what amplifies the supernova’s luminosity. But to understand how this happens, researchers need multidimensional simulations.

“To do 3D simulations of magnetar-powered superluminous supernovae, you need a lot of supercomputing power and the right code, one that captures the relevant microphysics,” said Ken Chen, lead author of the paper and an astrophysicist at the Academia Sinica Institute of Astronomy and Astrophysics (ASIAA), Taiwan.

He adds that the numerical simulation required to capture the fluid instabilities of these superluminous events in 3D is very complex and requires a lot of computing power, which is why no one has done it before. 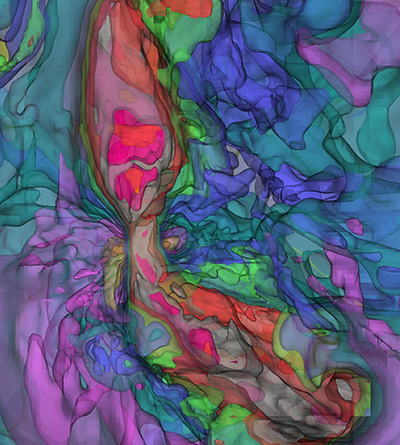 The turbulent core of a magnetar bubble inside the superluminous supernovae. Color coding shows densities. The magnetar is located at the center of this image and two bipolar outflows are emitted from it. The physical size of the outflow is about 10,000 km. (Image by Ken Chen)

Fluid instabilities occur all around us. For instance, if you have a glass of water and put some dye on top, the surface tension of the water will become unstable and the heavier dye will sink to the bottom. Because two fluids are moving past each other, the physics of this instability cannot be captured in one dimension. You need a second or third dimension, perpendicular to height to see all of the instability. At the cosmic scale, fluid instabilities that lead to turbulence and mixing play a critical role in the formation of cosmic objects like galaxies, stars, and supernovae.

“You need to capture physics over a range of scales, from very large to really tiny, in extremely high-resolution to accurately model astrophysical objects like superluminous supernovae. This poses a technical challenge for astrophysicists. We were able to overcome this issue with a new numerical scheme and several million supercomputing hours at NERSC,” said Chen.

For this work, the researchers modeled a supernova remnant approximately 15-billion kilometers wide with a dense 10-kilometer wide magnetar inside. In this system, the simulations show that hydrodynamic instabilities form on two scales in the remnant material. One instability is in the hot bubble energized by the magnetar and the other occurs when the young supernova’s forward shock plows up against ambient gas.

“Both of these fluid instabilities cause more mixing than would normally occur in a typical supernova event, which has significant consequences for the light curves and spectra of superluminous supernovae. None of this would have been captured in a one-dimensional model,” said Chen.

They also found that the magnetar can accelerate calcium and silicon elements that were ejected from the young supernova to velocities of 12,000 kilometers per second, which account for their broadened emission lines in spectral observations. And that even energy from weak magnetars can accelerate elements from the iron group, which are located deep in the supernova remnant, to 5,000 to 7,000 kilometers per second, which explains why iron is observed early in core-collapse supernovae events like SN 1987A. This has been a long-standing mystery in astrophysics. 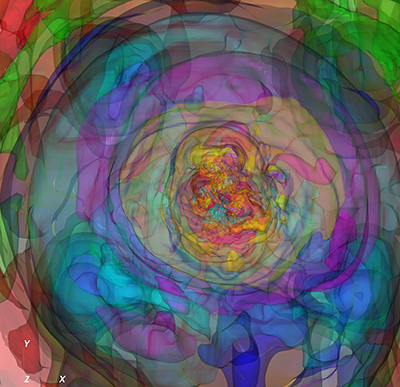 Turbulent core of magnetar bubble inside the superluminous supernovae. Color coding shows the densities. The magnetar is located at the center of this image. Strong turbulence is caused by the radiation from the central magnetar. (Image by Ken Chen)

“We were the first ones to accurately model a superluminous supernova system in 3D because we were fortunate to have access to NERSC supercomputers,” said Chen. “This facility is an extremely convenient place to do cutting-edge science.”

In addition to Chen, other authors on the paper are Stan Woosley (University of California, Santa Cruz) and Daniel Whalen (University of Portsmouth and University of Vienna). The team also received technical support from staff at NERSC and Berkeley Lab’s Center for Computational Sciences and Engineering (CCSE).

Chen started using NERSC as a graduate student at the University of Minnesota in 2011, then as the IAU-Gruber Fellow in the Department of Astrophysics at UC Santa Cruz before taking positions at the National Astronomical Observatory of Japan, and his current role at ASIAA.