Searching for Evidence of a ‘Neutrinoless’ Particle Process 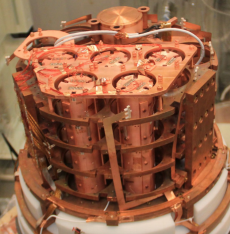 The CUPID-Mo detector is installed in the Edelweiss cryostat at Modane Underground Laboratory (LSM) in France. (Credit: CUPID-Mo collaboration)

Nuclear physicists affiliated with the U.S. Department of Energy’s Lawrence Berkeley National Laboratory (Berkeley Lab) played a leading role in analyzing data for a demonstration experiment that has achieved record precision for a specialized detector material. The data-analysis component of this ground-breaking research was conducted entirely at the National Energy Research Scientific Computing Center (NERSC), a DOE Office of Science user facility located at Berkeley Lab.

The CUPID-Mo experiment is among a field of experiments using a variety of approaches to detect a theorized particle process, called neutrinoless double-beta decay, that could revise our understanding of ghostly particles called neutrinos, and of their role in the formation of the universe. Preliminary results from CUPID-Mo, based on analysis of data collected from March 2019 to April 2020, set a new world-leading limit for the neutrinoless double-beta decay process in an isotope of molybdenum known as Mo-100. Isotopes are forms of an element that carry a different number of uncharged particles called neutrons in their atomic nuclei.

The new result sets the limit on the neutrinoless double-beta decay half-life in Mo-100 at 1.4 times a trillion-trillion years, a 30% improvement in sensitivity over the Neutrino Ettore Majorana Observatory 3 (NEMO 3), a previous experiment that operated at the same site from 2003-2011 and also used Mo-100. A half-life is the time it takes for a radioactive isotope to shed half of its radioactivity.

All of the data from the CUPID-Mo experiment – the CUPID acronym stands for CUORE Upgrade with Particle IDentification, and “Mo” is for the molybdenum contained in the detector crystal – is transmitted from the Modane Underground Laboratory in France to the Cori supercomputer at NERSC.

Benjamin Schmidt, a postdoctoral researcher in Berkeley Lab’s Nuclear Science Division, led the overall data analysis effort for the CUPID-Mo result. The international effort to produce the CUPID-Mo result is remarkable, he said, given the context of the global pandemic that had cast uncertainty over the continuing operation of the experiment.

“NERSC has been a great resource to create the space for international collaboration,” Schmidt said. “We are using NERSC and, in particular, Cori for every aspect in the analysis. In terms of our workflow, all our data is going to NERSC and most of the GEANT 4 detector simulations we perform are run on Cori.”

Schmidt credited the efforts of the data-analysis group he led for finding a way to work from home and produce the results from the experiment in time to present them at Neutrino 2020, a virtual International Conference on Neutrino Physics and Astrophysics hosted by Fermi National Accelerator Laboratory.

“The computing resources used for the data production were fairly small, with ~30,000 CPU compute hours for data production and the largest chunk of our usage (~105,000 CPU compute hours) allocated for Geant4 MC simulations,” he said. “But the availability and reliability of NERSC computing resources in the final stages of the analysis was crucial to get the result ready in time for Neutrino2020.”