Daniela Ushizima, a staff scientist in the Computational Research Division at Lawrence Berkeley National Laboratory, is among 25 female scientists recently honored by 3M for innovative research that has addressed key societal challenges and brought light to the need for greater gender equity in the science community and beyond. 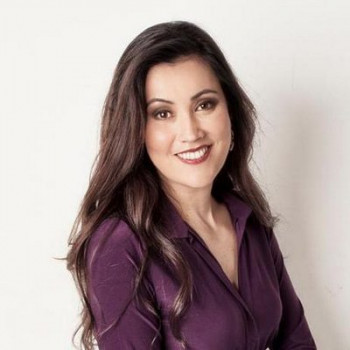 The “25 Women in Science in Latin America” awards were presented by 3M Latin America on February 11 via a virtual ceremony that coincided with the International Day of Women and Girls in Science. More than 1,000 specialists in STEM applied for the award, and each project was reviewed by a jury of specialists and professionals. The submissions were evaluated on the innovation of the proposals, importance of the problem solved, scalability, and impact on the community. Ushizima was one of six winners representing Brazil; the other honorees came from Argentina, Chile, Colombia, Peru, Mexico, Panama, and Uruguay.

“Without a doubt, diversity is essential, vibrant, and helps us build an increasingly fair and sustainable future,” said Marcelo Oromendia, president of 3M Brasil, in a news release announcing the awards. “As educators, parents, leaders, and as a company, we must foster initiatives that increasingly promote space for women in scientific careers, contributing to gender equity in science and in our society.”

For this award, Ushizima was recognized for her role in the creation and development of more efficient and effective methods for cell analysis, particularly in the detection of cervical cancer. Detecting cell pathologies, such as those that arise from leukemia and cervical cancer, are often examined through cell microscopy. While advanced techniques such as the Bethesda System for reporting cervical morphologies and liquid-based cytology are being deployed in wealthy nations to detect these pathologies, many parts of the world without access to advanced methodologies have Pap smears as their first line of defense, which depends on visual analysis to detect aberrant cells.

The result is a series of algorithms and software methodologies that automate the process of identifying where the cells are, separate the cell’s nuclei and cytoplasm, and rank the cells according to their appearance. In 2014, the team won first place in a challenge from the IEEE International Symposium on Biomedical Imaging to develop tools to extract the boundaries of individual cytoplasm and nucleus from overlapping cervical cell images; this work was later published in collaboration with members of the Australian Centre for Visual Technologies at The University of Adelaide, Australia.

Since then, Ushizima has continued to refine the algorithms to improve cervical cancer cell analysis and, for several tasks, adopted the package scikit-image, maintained by her colleague Stefan van der Walt of the Berkeley Institute for Data Science (BIDS) at UC Berkeley; together they wrote a tutorial on the characterization of microtomography. Demands for cell analysis from biological and materials samples led Ushizima to spearhead initiatives such as ImageXD and computer vision tools such as image retrieval based on similarity (see Reverse image search for scientific data within and beyond the visible spectrum).

Another recent outcome of this research involves Silvia Miramontes, one of Ushizima’s students and a research affiliate with Berkeley Lab. Miramontes was recently awarded a National Institutes of Health fellowship to apply computer vision and artificial intelligence expertise acquired at the Lab to neuroscience projects at the Grinberg Laboratory at the University of California, San Francisco.