Now in its twelfth year, the award supports exceptional researchers during critical stages of their formative work by funding their research for five years. 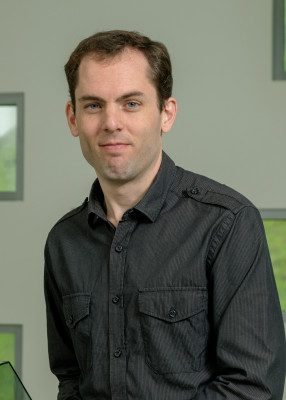 Saye will use his award to develop numerical models for fluid interface dynamics, high-order accurate algorithms for complex geometry, and multi-scale, multi-physics simulations.

In particular, part of his early career work will be dedicated to developing numerical techniques for understanding liquid atomization, which studies how a body of liquid forms micrometer-thick films and tendrils that subsequently tear apart into little droplets. This process plays a key role in a range of environmentally sensitive and energy-intensive processes, including spray painting, medical nebulizer devices, biofuel combustion, powder metallurgy, and agriculture.

“There is a need to explore the physics of the underlying mechanisms that drive liquid atomization so we can optimize device design and reduce energy usage and material waste. Numerical simulation is often one of the only ways to go about this. However, traditional numerical techniques are challenged by the highly complex geometry at play, and progress using these lower-order approaches is stalling,” said Saye.

With his award, he aims to significantly advance the state of the art in atomization numerics and multi-physics interface dynamics - remarkably complex modeling problems, he noted. “The contortions and physics involved are so demanding that, in a lot of cases, the existing state-of-the-art numerical methods cannot handle industrially relevant conditions, even with the highest resolution models running on supercomputers. Many of these kinds of problems also involve multiple kinds of interacting physics; identifying them and appropriately coupling physical models is an art in itself,” Saye said.

His goal is to move past the limitations of lower-order approaches to yield significantly higher-fidelity and more tractable simulations of multi-physics-driven fluid-interface dynamics involving highly complex geometry.

Examples of Saye’s work on higher-resolution methods include his leadership on two DOE High Performance Computing for Manufacturing (HPC4Mfg) grants, both joint with PPG Industries. The first is on modeling rotary bell atomization devices, a key tool of industrial spray painting, with the goal of optimizing spray characteristics. This work combined the design and development of advanced mathematics and numerical algorithms at Berkeley Lab with jointly devised physical experiments carried out by PPG. The resulting framework was then implemented using HPC techniques. The second project, on multi-film paint coatings, combines these techniques, plus new work on coupled multi-physics models, to study accelerated coating processes that concurrently apply and cure multiple films of paint.

“I've had a passion for developing numerical methods in computational fluid dynamics, ever since my first undergraduate research project in Australia. There is a mix of mathematical modeling, algorithm development, implementation on high performance computers, and visualization which makes the overall process very rewarding and captivating,” he said.

Saye studied at the Australian National University and received a Bachelor’s of Philosophy degree with First Class Honors in 2007, specializing in applied mathematics. In 2013, he graduated from UC Berkeley with a Ph.D. in applied mathematics. His Berkeley Lab career began in 2013 as a Luis W. Alvarez Postdoctoral Fellow in Computing Sciences, and in 2017 he became a research scientist in Berkeley Lab’s Mathematics Group, where he is co-PI on one of the group’s long-standing DOE grants.

“I have greatly benefited from being part of the vibrant environment within the Berkeley Lab math group. I feel very fortunate to have received this award,” he said. 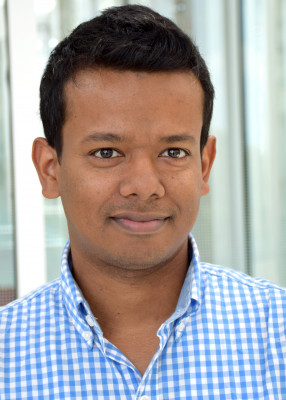 Azad will use his award to develop algorithmic foundations for scalable, portable, and usable machine learning algorithms and libraries. His work will primarily target machine learning on graphs, also known as graph representation learning.

“A graph is a mathematical model that can succinctly capture interactions between entities in various physical, social, and cyber-physical systems. Given the widespread presence of graph-structured data in chemistry, biology, and earth sciences, there is an undeniable need for high-performance and general-purpose graph analysis, as well as machine learning algorithms and libraries,” Azad explained.

With this Early Career Award, Azad hopes to develop high-performance graph analysis and machine learning algorithms that are scalable to the limits of modern supercomputers; portable to all computing platforms, including CPUs, GPUs, and supercomputers; and usable for a range of scientific applications, from chemistry to environmental science and even data analytics.

“We aim to take on these challenges by mapping graph algorithms to a handful of intelligent computational kernels that learn from data sparsity and hardware configurations. We will develop sparse linear algebra operations using autotuned and communication-avoiding algorithms that can scale to millions of threads, analyze graphs with trillions of edges, and exhibit portable performance on various computing platforms,” he said. “This project will also develop flexible and interpretable algorithms for graph embedding and graph neural networks that, in turn, rely on our intelligent primitives for performance.”

Azad received a bachelor’s degree in computer science and engineering from Bangladesh University of Engineering and Technology in 2006 and a Ph.D. in computer science from Purdue University in 2014. He is currently an Assistant Professor of Intelligent Systems Engineering at Indiana University, Bloomington, and an affiliate scientist in Berkeley Lab’s CRD. He’s also a key member of the Exabiome project, an Exascale Computing Project (ECP) application, and ExaGraph, an ECP Co-Design center.