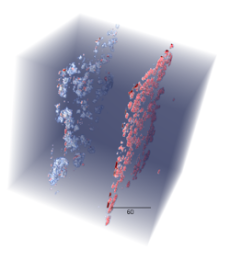 Semantic segmentation: Automated detection of dendrites (blue) and pitts (red) using Y-net, a deep-learning algorithm to automate the quality control and assessment of new battery designs that was run at NERSC on Cori and Perlmutter.

Electric cars are an integral part of our clean energy future — every time one replaces a gas-powered vehicle, it can save 1.5 tons of carbon dioxide per year. But to truly expand the population and reach of electric cars, new energy storage solutions must be developed to produce lighter vehicles with longer ranges and more powerful batteries.

A team of researchers from Lawrence Berkeley National Laboratory (Berkeley Lab) and the University of California, Irvine (UC Irvine) recently moved this effort forward with the development of deep-learning algorithms to automate the quality control and assessment of new battery designs.

The research team, led by Berkeley Lab’s Daniela Ushizima, a staff scientist in the Applied Mathematics and Computational Research Division and a Berkeley Institute for Data Science research affiliate, includes scientists from the National Fuel Cell Research Center (NFRC) at UC Irvine and collaborators from UC Berkeley’s Department of Electrical Engineering and Computer Sciences and School of Information. Together, they created new deep-learning algorithms to automate the inspection of batteries with data acquired using advanced instruments, including those at Berkeley Lab’s Advanced Light Source (ALS). By using X-ray tomography as the input data, as well as prototypes defined by battery experts, the research team developed automated methods to detect battery defects in rechargeable lithium metal batteries and measure their growth during battery cycling.

The researchers focused on solid-state lithium metal batteries (LMB), which are different from traditional lithium-ion batteries in that they use solid electrodes and electrolytes, providing superior electrochemical performance and high energy density.

“This means increased charge storage capacity and the ability to hold almost twice the energy of a traditional lithium ion battery – higher energy density at lower battery weight and size,” said Ushizima, who provided more details about this research during a presentation, Lithium Metal Battery Characterization using X-ray Imaging and Machine Learning, at the American Physical Society Meeting on March 16. Her co-authors include Jerome Quenum, David Perlmutter, Dula Parkinson of Berkeley Lab, and Ying Huang and Iryna Zenyuk of the NFCR.

Some of the challenges of this new technology are predicting battery cycling stability and preventing the formation of lithium dendrite growth, she noted. This harmful phenomenon may occur during LMB charge and discharge, when lithium can deposit irregularly, building up dendrites (lithium plating) that lead to failures, such as short-circuiting. These morphologies are key to the LMB quality, and they can be captured and analyzed using X-ray microtomography (XRT) scans. Machine learning algorithms and multiscale representation of XRT from LMB samples enable the quantification of LMB defects.

“Quality control and quality assessment require quantifiable metrics, which means detecting and measuring dendrites automatically,” Ushizima explained. To do this requires running semantic segmentation by, for example, using convolutional neural networks (CNNs). Among the variety of segmentation algorithms based on CNN, one of the first CNNs the research team tested was a U-net scalable implementation they recently published in Nature Scientific Data.

“The advantage of using our U-net was the ability to quickly adapt it from ceramic matrix composite images to the new microCT data coming from batteries,” she said. “Our latest efforts are centered on state-of-the-art algorithms such as vision transformers. One of the advantages is the ability to learn a sequence of representations from the microCT data as part of capturing the multiscale aspects of microCT microstructures.”

The ALS and APS are DOE Office of Science user facilities.