A Flaw in the Law

NOTE: This archived news story is made available as-is. It may contain references to programs, people, and research activities that are no longer active at Berkeley Lab. It may include links to web pages that no longer exist or refer to documents no longer available.

Turbulence is a primal force that can be seen all around us, from the scudding of clouds to the frothing of the sea, from the wrinkling of flames to the swirling of leaves. It is especially important to the study of aerodynamics, in which correctly calculating the effects of turbulence can determine whether or not an airplane remains aloft. Since 1938, the standard equation presented in aerodynamics and engineering textbooks for calculating the forces exerted on a solid object by turbulence has been the "Law of the Wall."

This equation has been so thoroughly accepted as correct that when data from wind tunnel experiments did not agree with the Law of the Wall's predictions, researchers sought ways to correct their experimental methods.

However, according to calculations by Berkeley Lab's Alexandre Chorin and Grigory Barenblatt, under the high-speed turbulent conditions that commonly occur in aerodynamics as well as many industrial situations, it is the Law of the Wall that breaks down. The forces exerted by turbulence can be very different from what the Law would predict. A more accurate model should lead to better, safer and more economical designs.

"The Law of the Wall was viewed as one of the few certainties in the difficult field of turbulence, and now it has been dethroned," Chorin said when this discovery was announced. "Generations of engineers who learned the law will have to abandon it. Many textbooks will have to be revised."

Test results from the latest and most accurate wind tunnel experiments support the assertions of Chorin and Barenblatt. A key to their theoretical breakthrough was to ask the right question for experimental data to answer. This enabled them to finally check the accuracy of the Law of the Wall.

"For years, people have looked at turbulent flow without understanding what they saw," said Chorin. "The theory we developed led to predictions of a beautiful and complex structure in turbulence near walls that could be seen in the experimental data."

In mathematical terms, Chorin and Barenblatt showed that correct descriptions of the effects of turbulence on solid objects-referred to as "walls" in aerodynamic studies-require a family of "scaling laws" rather than a single "Law of the Wall."

Mathematically, the solutions of the equations of motion in fluid mechanics are chaotic at high speeds, even the most minute perturbations change them. "Because of this," says Chorin, "what is of interest is not specific solutions, which we may never observe, but the ability to make statistical predictions based on collections of solutions. Such collections of solutions are amenable to rigorous analysis by statistical methods."

Chorin and Barenblatt have made progress in this rigorous analysis that has contributed to their debunking of the Law of the Wall. "What was a general mathematical theory has now been validated by the data in a specific problem," says Chorin. "This happy agreement of theory and experimental data constitutes a step toward a fundamental theory of turbulence." 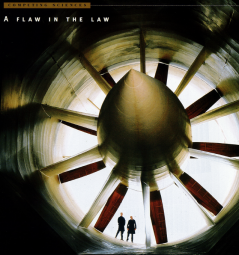 Wind tunnels and an equation for turbulence known as the Law of the Wall have been two of the primary tools used in aerodynamic research. Wind tunnel experiments combined with faith in the Law of the Wall to accurately calculate turbulent forces have been so strong that when wind tunnel test results failed to agree with the Law's predictions, engineers would have tunnel walls repeatedly polished to eliminate any frictional drag that might be causing errors.

Alexandre Chorin has long been fascinated by the mathematics of disorder. He has spent much of his distinguished career developing probabilistic techniques that can solve the complexities of turbulent flow and other phenomena in fluid mechanics. One of the most succesful of these techniques is the "random vortex method" which provides impressionistic pictures of natural processes that approximate their actual physical behavior. As Chorin once said, "Sometimes a Monet can capture nature more accurately than a photograph."