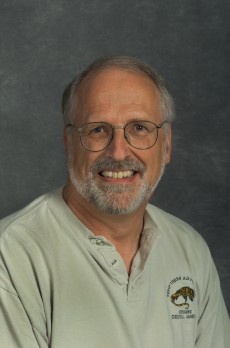 NERSC's David Quarrie is the chief archtect for the LHC's ATLAS experiment.

David Quarrie, leader of the High Energy and Nuclear Physics Software Group in NERSC, has accepted a two-year assignment as chief architect for the ATLAS high-energy physics experiment. ATLAS is an international research program to be carried out at the Large Hadron Collider at CERN in Switzerland beginning in 2005.

Quarrie’s new position will occupy about 50 percent of his time, and he will also continue working on software efforts related to the BaBar project at the Stanford Linear Accelerator Center.

The job of the chief architect is to establish a coherent vision for the software, Quarrie said. On a practical level, the task is to produce and implement the framework or environment in which scientists will write the physics algorithms to do the physics they need to do as part of the ATLAS experiment. The architect is responsible for all the off-line software for reconstruction, simulation, physics analysis and the final real-time filter for on-line data generation and collection.

It’s not a head-in-the-clouds position, he added, but one which requires producing results and meeting a series of milestones every three to four months over the next several years. Quarrie’s team, which includes Chris Day from his group and members of NERSC’s HENP Systems Group, has already met its first milestone by producing a prototype of the framework. The team adapted work done by another group at CERN and will revise it and add functionality in the months ahead.

Quarrie accepted the position after serving as a member of the ATLAS Architecture Task Force. That assignment had him sitting in on videoconferences from midnight to 8 a.m. every other Friday night for almost four months. When no one else who was qualified stepped forward for the chief architect position, Quarrie assumed responsibility.

This won't be the first attempt to produce the software architecture for ATLAS but Quarrie is hoping that this one will be a success. He says the challenges are more sociological than technical. ATLAS involves about 1,800 researchers from dozens of countries. “It’s difficult to get consensus on technical issues,” Quarrie said.

The technical challenges come from the large, complex nature of the collaborative experiments, Quarrie said. The ATLAS program is scheduled to begin conducting experiments in the year 2005 and is the next generation of data-intensive computing project in high-energy physics, similar to the experiments at Brookhaven, Fermilab and SLAC, but on a larger scale. While the STAR (Solenoidal Tracker at RHIC) will generate about 250 terabytes of data annually, ATLAS will yield up to 1.5 petabytes per year for 10 years.

The five-story high, 7,000 ton ATLAS experiment is designed primarily to find the Higgs boson (or family of bosons), the carrier of the Higgs field, which is thought to impart mass to all particles with mass, including the predicted massive "sparticles" of supersymmetry theory. The Higgs boson is weakly interacting, and will be seen only rarely in the debris of millions of proton collisions.

Quarrie’s duties will require him to spend about two weeks of every six at CERN in Geneva. Although the long flights and nine-hour time difference make for a grueling trip, he is looking forward to working on a project at CERN -- the first since he earned his Ph.D. at the center in 1974. “It takes me back to my youth,” he said with a laugh. Trained as a physicist, Quarrie has been involved in high energy physics computing since 1970 and has worked at Berkeley Lab since 1993.