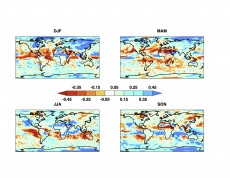 These images show the fractional change from 1979 to 2079 in the 20-year return value of seasonal maxima of daily precipitation as computed using the Parallel Climate Model.

Lenny Oliker Michael Wehner, a cli- mate researcher in CRD’s Scientific Computing Group, has received a National Science Foundation grant to analyze the results of three new cli- mate models as a means of determining their predictive quality. Each of the three mod- els will be run to predict both past and future cli- mate change patterns. The results will also be compared with observa- tional climate data to see how the predictions and observations corre- late.

“Some features will be correct, some will be wrong and some will be difficult to determine,” said Wehner. “Our goal is to learn about the ability of the models to predict reality, and hopefully we will learn moreabout the reality of climate change in the process.”

When finished, his work will be incorporated into an international report on climate change. The report is designed to advise governments on the state of scientific research on climate change so that polices can be set.

The first part of Wehner’s research will build on his fruitful collaboration with Ben Santer of the Program for Climate Model Diagnosis and Intercomparison (PCMDI) at the Lawrence Livermore National Laboratory. In a series of studies, the team led by Santer has used the Parallel Climate Model (PCM) and observational data to show that statisti- cally significant changes to the tropospheric temperature, lower stratospheric tempera- ture, and tropopause height have occurred in the recent past, and that these changes were the result of human activities. This work was reported in the July 25, 2003, edi- tion of Science magazine.

Wehner will extend a multivariate climate change detection analysis, which he and colleagues have already applied to the older PCM, to early simulations from the three most recent U.S. coupled climate models: the Goddard Institute for Space Studies (GISS) model, the Geophysical Fluid Dynamics Laboratory (GFDL) model, and the Community Climate System Model (CCSM3) from the National Center for Atmospheric Research.

The second part of Wehner’s research is to characterize the ability of coupled climate models to simulate extreme weather events. While the mathematical formalisms neces- sary for rigorous statistical description of extreme events are quite well developed, application to climate models is still in its infancy.

The ability of these models to accurately simulate historical climate changes in the twentieth century will determine the credibili- ty of their predictions of climate change dur- ing the twenty-first century and beyond.

“Five years ago, the results from the climate change models were at odds with the obser- vational data,” Wehner said. “But now, with our ability to simulate sea, ice and land sys- tems, we are finding real similarities between the observational data, particularly from satellites, and the models.”

Wehner’s proposal, titled “Multivariate Climate Change Detection,” was one of sev- eral funded as part of the U.S. CLIVAR (Climate Variability and Predictability) pro- ject’s Climate Model Evaluation Project (CMEP). The objective of CMEP is to increase diagnostic research into the quality of model simulations, leading to more robust evaluations of model predictions and a better quantification of uncertainty in projections of future climate. U.S. CLIVAR is a joint project of NSF, NOAA, NASA and DOE, and is part of an international, interdisciplinary research effort within the World Climate Research Programme.

The first step is getting the necessary climate data in place. Wehner is currently transporting data files from Oak Ridge National Lab and the National Center for Atmospheric Research. Wehner will then run the models using the data.

The results of the CMEP analyses will be pre- sented at a CLIVAR workshop in Hawaii from March 1–4, 2005. A workshop report summa- rizing the presentations will be furnished to the lead authors of the relevant chapters for the Intergovernmental Panel on Climate Change’s (IPCC) Assessment Report Four, a comprehensive review of current knowledge about climate change, which will be published in 2007.

“Until now, most of the science for the IPCC has been done by Europeans and the time is right for Americans to begin making a major impact in this field by becoming a major source of the science, not just analyzing the European data,” Wehner said. “By showing that our models, such as the CCSM3, are credible, we are poised to make a major con- tribution. This is really a high point in my career.”