BERKELEY, Calif. and ANN ARBOR, Mich. — Two of the nation’s leading research networks — the U.S. Department of Energy’s (DOE) Energy Sciences Network (ESnet) and Internet2 — announced today that they have completed five interconnected rings, each consisting of one or more 10-gigabit-per-second (Gbps) paths, that form a coast-to-coast network that is the backbone of DOE’s next-generation scientific network.

Called ESnet4, the new network built by this partnership is a highly reliable, high capacity nationwide network that will greatly enhance the capabilities of scientists at national laboratories and universities across the country. The long-term ESnet-Internet2 partnership, initially announced in August 2006, brings together two advanced networks which have a combined 30 years of experience in providing service to thousands of researchers around the world. The network is managed by ESnet and operated across Internet2’s backbone infrastructure. 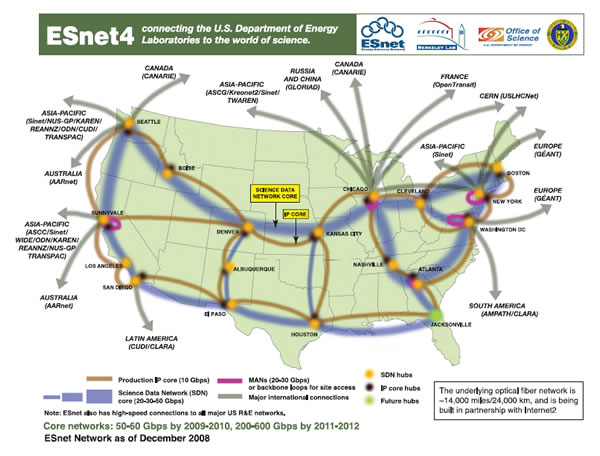 The next steps will be to add a sixth ring connecting the northern and southern sections of the national network, and to increase the capacity of all of the rings by adding 10 Gbps to the existing rings. Once complete, these connections will increase both bandwidth and network reliability for the tens of thousands of DOE-supported researchers at national laboratories and universities around the country.

“The deployment of ESnet4 is remarkable both for its technical achievement and for the fact that it is proceeding ahead of schedule, bringing more robust and innovative services to the U.S. research community and their collaborators around the globe,” said Michael Strayer, director of DOE’s Office of Advanced Scientific Computing Research, which funds ESnet, managed by Lawrence Berkeley National Laboratory. “Our partnership with Internet2 underscores the value of the collaborative spirit we have fostered in the high performance computing community for years — you bring experts together, let them do their jobs and the nation’s researchers reap the rewards.”

ESnet4 network utilizes dedicated 10 Gbps wavelengths on the new Internet2 nationwide optical infrastructure and will seamlessly scale by adding additional 10 Gbps circuits each year for the next four to five years in order to meet the needs of the DOE Office of Science. The Office of Science oversees more than 30 DOE laboratories, 100,000 DOE laboratory scientists, 18,000 researchers from universities, other government agencies and private industry who contribute to many large scale DOE research activities like the experiments at the Large Hadron Collider project at CERN, the Relativistic Heavy Ion Collider at Brookhaven National Lab, among many others.

In addition to providing production IP services, ESnet4 will enable new optical services like point-to-point dynamic circuit networking, which will serve as an advanced and dependable platform for scientists and researchers supported by ESnet. ESnet is working with Internet2 and other partners to develop and deploy interoperable dynamic circuit networking which extends the reach and value of this revolutionary technology.

“Internet2 and ESnet share a commitment to support next-generation network capabilities that will allow our scientific community to focus its resources on its core research and educational objectives," said Doug Van Houweling, Internet2 president and CEO. "With the first national phase of the ESnet4 deployment complete, the ESnet and Internet2 communities now have capabilities that just a few years ago could only be imagined, enabling scientists and researchers across the country who utilize this robust network to achieve new breakthroughs in physics research.”

The new ESnet4 network is provided by Internet2 using advanced optical equipment from Infinera, Inc., and through its agreement with Level 3 Communications. Internet2 and Level 3 have deployed a dedicated, high capacity backbone with dynamic optical circuit provisioning for the Internet2 community. Internet2 and ESnet will operate the underlying optical infrastruture to provide flexibility and control in the dynamic provisioning of optical circuits needed to support today's large-scale and highly complex scientific research.