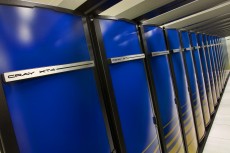 The next-generation supercomputer will be used to advance a broad range of scientific research. Named “Franklin” in honor of the first internationally recognized American scientist, Benjamin Franklin, the Cray XT4 system enables researchers to tackle the most challenging problems in science by conducting more frequent and increasingly detailed simulations and analyses of massive sets of data.

“With Franklin, we are increasing the computational power available to our 2,900 NERSC users by a factor of six, providing them with access to one of the world’s fastest supercomputers dedicated to open scientific research,” said Michael Strayer, associate director of DOE’s Office of Advanced Scientific Computing Research, which funds NERSC. “We have high expectations that NERSC’s proven track record of scientific productivity will provide many new discoveries and understandings.”

The highly scalable Cray XT4 system is capable of running applications across a wide range of scientific disciplines, including astrophysics, fusion, climate change prediction, combustion, energy and biology. Franklin will enable researchers at Berkeley Lab to address such problems as developing better models of the Earth’s climate and using it to predict the impact of carbon dioxide emissions and global warming. The powerful system will also allow researchers to explore clean energy technologies and validate theories that attempt to uncover evidence that explains the origin of the universe.

“Our new Cray XT4 system has demonstrated that it can deliver a high sustained performance on a demanding scientific workload in a rigorous production environment while at the same time permitting users to explore scaling to 20,000 cores,” said Horst Simon, director of the NERSC Division at Lawrence Berkeley National Laboratory. “NERSC is proud to accept one of the largest ‘broad impact science’ supercomputers in the world for its demanding user community.”

“We are very excited to see one of the largest supercomputers in the world opened up to the expansive user community at NERSC,” said Peter Ungaro, president and CEO of Cray.  “The Cray XT4 system will provide the computational power to enable researchers who compute at NERSC to efficiently tackle some of the most important problems we face today.  With high sustained performance, scalability and upgradeability to petaflops capacity as its key attributes, the Cray XT4 supercomputer will help enable major advances in a number of scientific fields now and in the future.”

As part of an extensive testing program, a number of NERSC users were given early access to Franklin to ensure that the system could handle the most demanding scientific applications.

“I am extremely impressed with Franklin,” said Robert Harkness, an astrophysicist at the San Diego Supercomputer Center working on a project aimed at precisely measuring the cosmological parameters that describe the shape, matter-energy contents, and expansion history of the universe. Running an application called ENZO, the project seeks to increase our understanding of the dark energy and dark matter thought to make up more than nine-tenths of the universe. “We have run the largest instances of ENZO ever, anywhere, and found that the performance and scaling on Franklin are both strong and better than other computer platforms we have used at other computing centers.”

Another project, led by Julian Borrill of Berkeley Lab, leveraged Franklin’s computing power to prepare for analyzing the massive amounts of data to be sent back to Earth by the Planck satellite, set for launch in 2008. A joint U.S.-European project, Planck will use 74 detectors to measure the cosmic microwave background, the residual radiation from the actual “Big Bang.”  Last scattered some 400,000 years after the Big Bang, it provides the earliest possible image of the universe, including encoded signatures of the fundamental parameters of all matter.

“I am delighted to report that we have just successfully created a map of the entire Planck Full Focal Plane one-year simulation,” Borrill said.  “This is the first time that so many data samples — three terabytes of data in 50,000 files, representing all the information collected by Planck during one mission year — have been analyzed simultaneously, a primary goal of our group's early Franklin efforts.”

Franklin contains 9,672 AMD dual-core Opteron 2.6 GHz processors with 39 terabytes of memory.  Running on 16,384 processor cores, the group was able to complete the run in just 45 minutes.