A research paper showing how zinc oxide can be manipulated to become a good material for photovoltaic devices was among the most-accessed papers published by Nano Letters in the third quarter.

The paper, written by Joshua Schrier, Denis Demchenko and Lin-Wang Wang in CRD’s Scientific Computing Group, laid out the calculations that narrowed the band gap — the energy difference between the top of the valence band and the bottom of the conduction band — of zinc oxide. To effectively absorb light, materials must have band gaps which match the distribution of photons that pass through the earth’s atmosphere, from the sun.

Nano Letters, published by the American Chemical Society, recently unveiled the 20 most downloaded or viewed papers from July through September. Schrier’s paper, “Optical Properties of ZnO/ZnS and ZnO/ZnTe Heterostructures for Photovoltaic Applications,” ranked No. 10 and was also co-authored by Paul Alivisatos, head of the Material Science Division at Berkeley Lab. 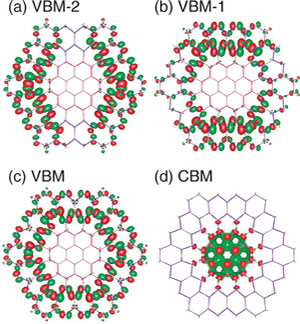 The high cost of the conventional photovoltaic material, silicon, and the scant alternatives for building solar energy equipment for the mass market have prompted scientists to explore nanostructure devices. Previous experimental work at Berkeley Lab by Alivisatos and co-workers has demonstrated how semiconductor nanocrystals can be used to make inexpensive devices. However, these nanocrystals have typically been made from materials such as cadmium selenide (CdSe) and cadmium telluride (CdTe), which contain expensive and toxic elements.

Schrier and his collaborators turned to zinc oxide (ZnO), an abundant, non-toxic and stable compound. ZnO alone isn’t an ideal material because it has a large band gap of 3.4 electron volt (eV). But stacked with another material, it could create a composite structure with a much smaller band gap, the researchers wrote, and they tested their theory with zinc sulfide (ZnS) and zinc telluride (ZnTe).

Using resources at the National Energy Research Scientific Computing (NERSC) center, the scientists calculated the optical properties of ZnO/ZnS and ZnO/ZnTe using plane-wave norm-conserving pseudopotential density function theory (DFT) with PETot code. They include a band-corrected pseudopotential scheme because DFT is inadequate for calculating the value of band gap.

Results of their work demonstrated significant reductions of the band gap for using both composite materials and structures, compared with using bulk ZnO alone. Strained superlattices showed a further reduction.