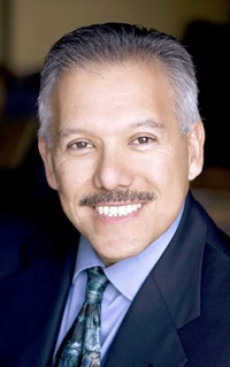 Dr. Meza has an exceptionally distinguished record as a mathematical scientist, an accomplished and effective head of a large department doing cutting-edge explorations in the computational sciences, computational mathematics, and future technologies, and a role model and active advocate for others from groups under-represented in the mathematical sciences. As a mathematician, his current research focuses on nonlinear optimization with an emphasis on methods for parallel computing, and he has also worked on various scientific and engineering applications including scalable methods for nanoscience, power grid reliability, molecular conformation problems, optimal design of chemical vapor deposition furnaces, and semiconductor device modeling. He is a much sought after speaker, both nationally and internationally, on topics ranging from his own research, through major invited talks on the importance of diversity such as his presentation as the 2008 Marjorie Lee Browne Colloquium Speaker for the University of Michigan's Martin Luther King, Jr. celebration, and advice important to young mathematicians-in-the-making such as his presentations to student groups on how they can be effective speakers and presenters themselves. His record of service to communities under-represented in mathematics includes co-organizing the Tenth CAARMS Conference in Berkeley, chairing the Mathematical Sciences Research Institute (MSRI) Human Resources Advisory Committee, co-chairing the annual Diversity Day workshops of the Society for Industrial and Applied Mathematics, and many other activities too numerous to mention here; however, they regularly extend from serving on high-level advisory committees on diversity for major scientific organizations, through rolling up his own sleeves and working directly with early-career mathematics students from under-represented groups, as he did in the 2007 MSRI Undergraduate Program (MSRI-UP).

The prize will be presented at the Fifth Blackwell-Tapia Conference, to be hosted by the Statistical and Applied Mathematical Sciences Institute (SAMSI) in Research Triangle Park, NC on November 14–15, 2008.

The mission of SACNAS (Society for Advancement of Chicanos and Native Americans in Science) is to encourage Chicano/Latino and Native American students to pursue graduate education and obtain the advanced degrees necessary for science research, leadership, and teaching careers at all levels. The SACNAS Distinguished Awards recognize scientific achievement, teaching, and mentorship of underrepresented minority students.

"The individuals to be recognized represent the highest caliber of mentoring and an established record of encouraging minority students to pursue advanced degrees in science, mathematics, and engineering," according to the award announcement, which continued, "[Dr. Meza] leads a group conducting cutting-edge research involving the marriage of new algorithmic techniques and advanced computing platforms. Dr. Meza has also worked on various scientific and engineering applications including scalable methods for nanoscience and power grid reliability. In addition, Dr. Meza is extremely active nationally in addressing the underrepresentation of minorities in mathematics."

The award will be presented by SACNAS president Aaron Velasco, Ph.D., during the opening ceremony of the organization’s annual national conference on Thursday, October 9, 2008, at the Salt Palace Convention Center in Salt Lake City, Utah.