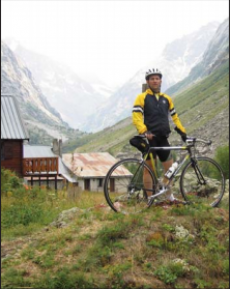 Built for speed: When Steve Cotter is not heading ESnet, he's zipping through the French Alps on bike.

Steve Cotter will be supporting science around the world as the new head of ESnet, the Department of Energy’s high-speed network, beginning Friday, August 29.

For more than a decade, Cotter has designed and deployed networks, for both research and commercial use, at home and abroad. Most recently, he served as Google’s network deployment manager for Europe, the Middle East, and Africa. At ESnet, he succeeds Bill Johnston, who is retiring from Berkeley Lab after more than 35 years.

“Steve Cotter brings to this job exactly the right combination of experience in all aspects of network design, development, deployment and operation,” said LBNL Associate Laboratory Director Horst Simon. “On top of that, Steve is already familiar with ESnet’s staff and operations and has strong connections to the research network community. We are thrilled by his decision to lead ESnet.”

Before joining Google in 2007, Cotter worked for Internet2, a high performance network serving more than 300 institutions in the research and education community in the U.S. Since 2006, ESnet and Internet2 have worked as partners in building ESnet’s next-generation infrastructure.

“While at Internet2, I worked closely with ESnet on the design of their new infrastructure and became familiar with their research community and staff, a very impressive group,” Cotter said. “Bill Johnston is leaving some big shoes to fill, but it’s an exciting challenge and I welcome it. The services ESnet provides are not just good for the research community, but also the public by supporting important research in areas like global climate change and new and renewable energy sources.”

ESnet, or the Energy Sciences Network, is managed by Lawrence Berkeley National Laboratory for the Department of Energy. ESnet provides direct connections to more than 40 DOE sites, as well as fast interconnections to more than 100 other networks. Funded principally by DOE’s Office of Science, ESnet services allow scientists to make effective use of unique DOE research facilities and computing resources, independent of time and geographic location.

Based on his experience in the commercial sector, Cotter said he sees that ESnet is not alone in pushing the envelope of advanced networking and blieves the entire community can benefit from continuing ESnet’s strong record of building alliances with other organizations to advance the state of networking. Key areas include transferring massive sets of scientific data and supporting “cloud” computing.

“Google is an incredible place to work and I learned a lot, but ESnet is doing some amazing things as well,” Cotter said. “This is an opportunity to be part of a great team and to make an impact.” Cotter brings a broad range of experience with other leading firms to his new role. While serving as Internet2’s Deputy Operations Officer, their close collaboration with ESnet’s OSCARs project and others in the research community resulted in the rollout of Internet2’s Dynamic Circuit Network – delivering on NSF’s Cyberinfrastructure vision that the network should be available as a schedulable, on-demand resource like supercomputers are today. Cotter said “I was also the CEO of Internet2’s subsidiary FiberCo — brokering dark fiber acquisitions and providing consulting/project management services to the higher education and research community.”

Before that, Cotter was assigned from Internet2 to National LambdaRail, where he led the build-out and design of their DWDM (dense wave division multiplex- ing) and IP network. He got his start in optical network technologies while an engineer at Cisco Systems and also served as a Director in SBC Global Communications’ (now AT&T) engineering and construction departments. He is well known in the networking community, having been a speaker at networking meetings and conferences in the U.S. and Europe.

Although he has extensive experience in industry, Cotter said his approach to management was shaped during his eight years as a combat helicopter pilot in the U.S. Marine Corps. Cotter led missions in both the former Yugoslavia and Somalia and Liberia in Africa, facing everything from hostile fire to the most difficult weather conditions. “You learn to focus on the mission at hand, to push forward no matter what obstacles you come across, and to take care of those you are responsible for,” Cotter said. “You rely on your people to do their job, to do it well and to work as a team. I’ve carried over that philosophy of having faith in those who work for you by letting them do their job and getting out of their way.”

Raised in New Jersey, Cotter attended the U.S. Naval Academy, where he earned his bachelor’s degree in aeronautical engineering. He earned an MBA from Boston University and has completed about 75 percent of his coursework toward a master’s degree in Information Economics, Management and Policy at the University of Michigan.

Cotter and his wife, Pallas, have two young sons and live in Davis, Calif.