A Superbright Supernova That’s the First of Its Kind

But not the last, now that astronomers know where to look

Berkeley, CA – An extraordinarily bright, extraordinarily long-lasting supernova named SN 2007bi, snagged in a search by a robotic telescope, turns out to be the first example of the kind of stars that first populated the Universe. The superbright supernova occurred in a nearby dwarf galaxy, a kind of galaxy that’s common but has been little studied until now, and the unusual supernova could be the first of many such events soon to be discovered. 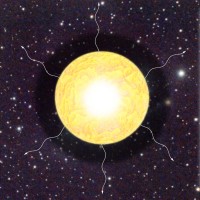 In this schematic illustration of the material ejected from SN 2007bi, the radioactive nickel core (white) decays to cobalt, emitting gamma rays and positrons that excite surrounding layers (textured yellow) rich in heavy elements like iron. The outer layers (dark shadow) are lighter elements such as oxygen and carbon, where any helium must reside, which remain unilluminated and do not contribute to the visible spectrum.

SN 2007bi was found early in 2007 by the international Nearby Supernova Factory (SNfactory) based at the U.S. Department of Energy’s Lawrence Berkeley National Laboratory. The supernova’s spectrum was unusual, and astronomers at the University of California at Berkeley subsequently obtained a more detailed spectrum. Over the next year and a half the Berkeley scientists participated in a collaboration led by Avishay Gal-Yam of Israel’s Weizmann Institute of Science to collect and analyze much more data as the supernova slowly faded away.

The analysis indicated that the supernova’s precursor star could only have been a giant weighing at least 200 times the mass of our Sun and initially containing few elements besides hydrogen and helium – a star like the very first stars in the early Universe.

“Because the core alone was some 100 solar masses, the long-hypothesized phenomenon called pair instability must have occurred,” says astrophysicist Peter Nugent. A member of the SNfactory, Nugent is the co-leader of the Computational Cosmology Center (C3), a collaboration between Berkeley Lab’s Physics Division and Computational Research Division (CRD), where Nugent is a staff scientist. “In the extreme heat of the star’s interior, energetic gamma rays created pairs of electrons and positrons, which bled off the pressure that sustained the core against collapse.”

“SN 2007bi was the explosion of an exceedingly massive star,” says Alex Filippenko, a professor in the Astronomy Department at UC Berkeley whose team helped obtain, analyze, and interpret the data. “But instead of turning into a black hole like many other heavyweight stars, its core went through a nuclear runaway that blew it to shreds. This type of behavior was predicted several decades ago by theorists, but never convincingly observed until now.”

SN 2007bi is the first confirmed observation of a pair-instability supernova. The researchers describe their results in the 3 December 2009 issue of Nature.

On the trail of a strange beast

SN 2007bi was recorded on images taken as part of the Palomar-QUEST Survey, an automated search with the wide-field Oschin Telescope at the California Institute of Technology’s Palomar Observatory, and was quickly detected and categorized as an unusual supernova by the SNfactory. The SNfactory has so far discovered nearly a thousand supernovae of all types and amassed thousands of spectra, but has focused on those designated Type Ia, the “standard candles” used to study the expansion history of the Universe. SN 2007bi, however, turned out not to be a Type Ia. For one thing, it was at least ten times as bright.

“The thermonuclear runaway experienced by the core of SN 2007bi is reminiscent of that seen in the explosions of white dwarfs as Type Ia supernovae,” says Filippenko, “but on a much larger scale and with a far greater amount of power.”

“The discovery is a great example of how we can get all the science, in addition to cosmology, out of the SNfactory search,” says Greg Aldering, SNfactory project leader, who was not an author of the Nature paper. “Berkeley Lab and Caltech’s Astronomy Department agreed that we would split the work, the Lab handling the Type Ia’s and Caltech all the other types.”

Nugent contacted Gal-Yam, then a Caltech postdoctoral fellow, the lead investigator for the all-other category. “I asked, are you interested? He said, sure!” Nugent then contacted Filippenko, who was about to conduct a night of observation with the 10-meter Keck I telescope on the summit of Mauna Kea in Hawaii. Filippenko immediately set out to obtain an optical spectrum of the unusual supernova.

Caltech researchers subsequently acquired additional spectra with the Keck telescope, as did Paolo Mazzali’s team from the Max Planck Institute for Astrophysics in Garching, Germany, using the Very Large Telescope (VLT) in Chile.

Says Mazzali, “The Keck and VLT spectra clearly indicated that an extremely large amount of material was ejected by the explosion, including a record amount of radioactive nickel, which caused the expanding gases to glow very brightly.”

Rollin Thomas of CRD, a member of C3 and the SNfactory, aided the early analysis, using the Franklin supercomputer at the National Energy Research Scientific Computing Center (NERSC) to run a code he developed to generate numerous synthetic spectra for comparison with the real spectrum.

“The code uses hundreds of cores to systematically test a large number of simplified model supernovae, searching through the candidates by adjusting parameters until it finds a good fit,” says Thomas. “This kind of data-driven approach is key to helping us understand new types of transients for which no reliable theoretical predictions yet exist.” The model fit was unambiguous: SN 2007bi was a pair-instability supernova.

“The central part of the huge star had fused to oxygen near the end of its life, and was very hot,” Filippenko explains. “Then the most energetic photons of light turned into electron-positron pairs, robbing the core of pressure and causing it to collapse. This led to a nuclear runaway explosion that created a large amount of radioactive nickel, whose decay energized the ejected gas and kept the supernova visible for a long time.”

Gal-Yam organized a team of collaborators from many institutions to continue to observe SN 2007bi and obtain data as it slowly faded over a span of 555 days. Says Gal-Yam, “As our follow-up observations started to roll in, I immediately realized this must be something new. And indeed it turned out to be a fantastic example of how we are finding new types of stellar explosions.”

Because it had no hydrogen or helium lines, the usual classification scheme would have labeled the supernova a Type Ic. But it was so much brighter than an ordinary Type Ic that it reminded Nugent of only one prior event, a supernova designated SN 1999as, found by the international Supernova Cosmology Project but unfortunately three weeks after its peak brightness.

Understanding a supernova requires a good record of its rise and fall in brightness, or light curve. Although SN 2007bi was detected more than a week after its peak, Nugent delved into years of data compiled by NERSC from the SNfactory and other surveys. He found that the Catalina Sky Survey had recorded SN 2007bi before its peak brightness and could provide enough data to calculate the duration of the rising curve, an extraordinarily long 70 days – more evidence for the pair-instability identification.

A fossil laboratory of the early Universe

“It’s significant that the first unambiguous example of a pair-instability supernova was found in a dwarf galaxy,” says Nugent. “These are incredibly small, very dim galaxies that contain few elements heavier than hydrogen and helium, so they are models of the early Universe.”

Dwarf galaxies are ubiquitous but so faint and dim – “they take only a few pixels on a camera,” says Nugent, “and until recently, with the development of wide-field projects like the SNfactory, astronomers had wanted to fill the chip with galaxies” – that they’ve rarely been studied. SN 2007bi is expected to focus attention on what Gal-Yam and his collaborators call “fossil laboratories to study the early Universe.”

Says Filippenko, “In the future, we might end up detecting the very first generation of stars, early in the history of the Universe, through explosions such as that of SN 2007bi – long before we have the capability of directly seeing the pre-explosion stars.”

With the advent of the multi-institutional Palomar Transient Factory, a fully automated, wide-field survey to find transients, led by Caltech’s Shri Kulkarni, and with the aid of the Deep Sky Survey established by Nugent at NERSC to compile historical data from Palomar-QUEST, the SNfactory, the Near Earth Asteroid Team, and other surveys, the collaborators expect they will soon find many more ultrabright, ultramassive supernovae, revealing the role of these supernovae in creating the Universe as we know it today.

The Berkeley Lab and UC Berkeley contribution to this work was supported by the U.S. Department of Energy’s Office of Science, the National Science Foundation, the Gordon and Betty Moore Foundation, the TABASGO Foundation, Gary and Cynthia Bengier, and the Richard and Rhoda Goldman Fund.

Berkeley Lab is a U.S. Department of Energy national laboratory located in Berkeley, California. It conducts unclassified scientific research for DOE’s Office of Science and is managed by the University of California. Visit our website at http://www.lbl.gov.