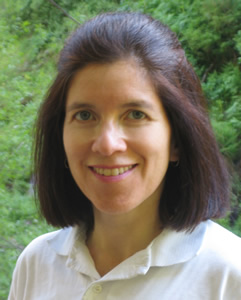 The award recognized Aragon's groundbreaking research in data-intensive scientific workflow management, and pioneering development of innovative methods for visualization, analysis, and organization of massive scientific data sets, which will be critical to the success of the Department of Energy (DOE) mission.

She was also praised for her dedication to community service. Over the years, Aragon has led multiple efforts to advance diversity in computing both within the Berkeley Lab and in the broader community; she is a founding member of Latinas in Computing. In her spare time, Aragon also volunteers to teach and mentor young mathematics, science and engineering students from eighth grade through graduate levels.

Established in 1996, PECASE honors the most promising researchers in the nation within their fields. Nine federal departments and agencies, including the DOE, annually nominate scientists and engineers who are at the start of their independent careers and whose work shows exceptional promise for leadership at the frontiers of scientific knowledge. Participating agencies award these talented scientists and engineers with up to five years of funding to further their research in support of critical government missions.

Aragon's Berkeley Lab career began in 2005, as lead software architect for SUNFALL, a collaborative visual analytics system developed for the Nearby Supernova Factory, an international astrophysics experiment and the largest data volume supernova search currently in operation. Her innovative ideas in image processing and machine learning algorithms, together with the application of novel human-computer interaction methods, helped the team increase project efficiency in some areas by nearly 90 percent. This work earned her a best paper award.

At the moment, Aragon is leading efforts to create computing systems for the Particle Data Group's Review of Particle Physics, the most cited publication in the field, as well as Deep Sky, an astronomical database covering the majority of the northern sky in unprecedented depth.

Before coming to Berkeley Lab, Aragon was a computer scientist at the NASA Ames Research Center and CEO of Top Flight Aviation, where she was an air show and test pilot and aerobatic champion. In 2004, she earned a Ph.D. in computer science from the University of California, Berkeley, and before that a Bachelor of Science degree in mathematics from the California Institute of Technology.

She has authored or co-authored 33 peer-reviewed publications and over 100 other publications in computer science and astrophysics. Since earning her Ph.D. five years ago, she has received four Best Paper awards at major computer science conferences, and has given over 40 invited talks. Earlier this year, Aragon was also honored as one of Hispanic Business magazine's 25 Women of Vision in 2009. The magazine is one of the premier business publications for the Hispanic market, with a primary circulation of 265,000 and a total audience of more than one million readers.

Berkeley Lab is a U.S. Department of Energy national laboratory located in Berkeley, California. It conducts unclassified scientific research and is managed by the University of California.