ESnet Honored as One of Top 10 Government IT Innovators 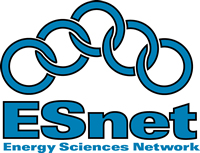 BERKELEY, CA — Once a year, InformationWeek magazine honors the most innovative players in the field of information technology, including the top 10 government agency innovators. And on Sept. 14, the U.S. Department of Energy’s (DOE) Energy Sciences Network (ESnet) was recognized as a member of this select group for its work helping thousands of researchers worldwide manage the massive amounts of scientific data stemming from the application of petascale supercomputers and high-precision instruments to cutting-edge disciplines such as climate science, high energy physics, astrophysics and genomics.

ESnet’s homegrown management tool for SDN, the Online Secure Circuits Advanced Reservation System (OSCARS), provides end-to-end virtual circuit services by leveraging industry-standard, carrier-grade protocols and technologies. OSCARS builds on those technologies to create circuits across ESnet4 and around the world through collaborations with other national and international networks. By collaborating with peer networks, ESnet ensures that DOE scientists and their collaborators can get the data they need to get their science done, even if that work requires the rapid movement of petabytes of data between continents.

And the innovative use of the OSCARS protocol to move network traffic on to the lower-cost switched network is anticipated to save the program nearly $20 million over the life of the project. It’s already being heavily used, with the majority of ESnet data now being carried on the Science Data Network.

“This award is a fitting recognition of the creative approach taken by the ESnet staff to anticipate and meeting the increasing demands of scientists for moving massive datasets and accessing one-of-a-kind experimental facilities,” said Michael Strayer, associate director of DOE’s Office of Advanced Scientific Computing Research, which oversees ESnet. “Since it was established in 1986, ESnet has been at the forefront of providing reliable and cutting-edge networking resources to the scientific community.”

InformationWeek’s Government IT Innovators category recognizes federal, state and local government agencies that have developed applications and IT systems that represent new and improved government services; better, more efficient IT practices; or otherwise notable and important advances in government technology.

“To be selected as one of the Top 10 IT innovators in government is both an honor and recognition of the critical roles that government agencies play in advancing our nation’s economic and scientific leadership,” said Steve Cotter, leader of the ESnet Department at Lawrence Berkeley National Laboratory. “In the case of ESnet, we are dedicated to providing DOE scientists with the support they need to do great work at the cutting edge, and to increase the scientific capabilities of the United States. This recognition validates our leading-edge efforts, highlighting the contributions of ESnet and DOE to our nation’s research community.”

In August 2009, ESnet received funding under the American Recovery and Renewal Act to develop and deploy a prototype 100 gigabits-per-second network — the world’s fastest — linking DOE’s largest unclassified supercomputing centers in California, Illinois and Tennessee at speeds 10 times faster than current technology. Known as the Advanced Networking Initiative, the project is a key step toward DOE’s vision of a 1-terabit networking linking DOE supercomputing centers and experimental facilities.

“ESnet is uniquely positioned to be a leader in networking innovation, as our production network operations allow us to see where our users are taking their research, and what the resulting network requirements will be,” Cotter said. “By design, the ESnet4 architecture is flexible and scalable — the performance increase offered by 100 Gbps networking technologies can be integrated into the existing network and made available to scientists. We are looking forward to providing scientists with the next generation of high-performance computing.”

The award by InformationWeek is the second honor received by ESnet this year. In April, ESnet received an Excellence.Gov award for its achievements in leveraging technology to develop a specialized network for transferring large-scale scientific datasets.