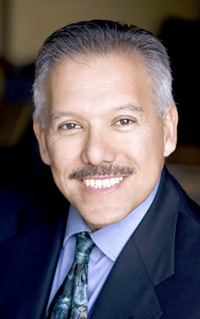 In recognizing Meza, the magazine wrote: "With multiple degrees — in electrical engineering, as well as a Ph.D. in Computational Mathematics — Dr. Meza puts them to good use in his research focused on new directions in technology, as well as expertise in subjects many of us can barely comprehend: nanoscience, molecular conformation, chemical vapor deposition."

Meza is a recognized leader in efforts to increase the diversity in science and mathematics, serving as a mentor, teacher and speaker at the national, state and local levels. In 2008, Meza was awarded the Blackwell-Tapia Prize, which recognizes a mathematical scientist who has contributed and continues to contribute significantly to research and who has served as a role model for mathematical scientists and students from under-represented minority groups or contributed in other significant ways to addressing the problem of the under-representation of minorities in mathematics. He was also named the 2008 SACNAS (Society for Advancement of Chicanos and Native Americans in Science) Distinguished Scientist Award, which recognizes scientific achievement, teaching, and mentorship of underrepresented minority students.