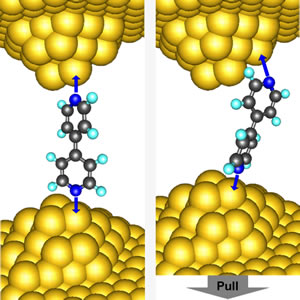 Researchers at the Lawrence Berkeley National Laboratory's (Berkeley Lab) Molecular Foundry and Columbia University found that electrical resistance through a molecular junction—a nanometer scale circuit element consisting of a single molecule contacted with gold wires—can be turned on and off by simply pushing and pulling the junction. Experts believe that this newly demonstrated molecular-scale control could be leveraged for future nanoscale electronic devices.

The switching phenomenon was initially discovered in experiments conducted by a team of researchers led by Latha Venkataraman of Columbia University. But the underlying physics would only later be understood when a group of theorists led by Jeff Neaton at Berkeley Lab's Molecular Foundry teamed up with the Columbia researchers to develop a theory to describe the conductance of individual molecules trapped between gold electrodes. This work was done with the help of the National Energy Research Scientific Computing Center's (NERSC) Cray XT4 system, named Franklin.

"If we wish to ultimately design circuit elements at the molecular scale, we need to understand how the intrinsic properties of a molecule or junction are actually connected to its measured resistance," said Neaton. "Knowing where each and every atom is in a single-molecule junction is simply beyond what's possible with experiments at this stage. For these sub-nanometer scale junctions—just a handful of atoms—theory can be valuable in helping interpret and understand resistance measurements."

In traditional electronic devices, charge-carrying electrons diffuse through circuits in a well understood fashion, gaining or losing energy through transactions with impurities or other particles they encounter. Electrons at the nanoscale, however, can travel by a mechanism called quantum tunneling in which, due to the small length scales involved, it becomes possible for a particle to disappear through an energy barrier and suddenly appear on the other side, without expending energy. Tracking such tunneling of electrons through individual molecules in nanoscale devices has proven difficult.

"You can't use a microscope to see that a molecule is trapped, you can only sense it indirectly through electrical conductivity data, for example. For more than a decade, researchers have been 'wiring up' individual molecules and measuring their electrical conductance," said Neaton.

He notes that routine formation of high quality electrical contacts, or "alligator clips," between nanostructures and electrical leads is extremely challenging. This makes experiments difficult to interpret; as a result, the reported conductance values-in experiment and theory often varied by an order of magnitude or more. The time was ripe for a quantitative comparison between theory and an experiment with well defined contacts, a collaboration made possible by the Molecular Foundry User Program.

One tool experimental researchers use to probe changes in nanostructure currents is called a scanning tunneling microscope (STM), which has a conductive gold tip. Previous work had shown a gold STM tip could repeatedly be plunged into a gold surface containing a solution of molecules and retracted, until the contact area between the tip and gold surface reduces to a single strand, like a necklace. When this strand finally breaks, nearby molecules can hop into the gap between strands and contact the gold electrodes, resulting in a sudden change in conductance. Using this technique, Venkataraman and her colleagues discovered that the conductance of molecules terminated by amines (related to ammonia) in contact with gold electrodes could be reliably measured.

Using a new theoretical approach, Neaton and his collaborators also began to study the conductance of a junction between gold electrodes and bipyridine—an aromatic molecule with two benzene-like rings, each containing one nitrogen atom. They hypothesized about the conductance of junctions arranged vertically between gold molecules and sandwiched at angles, working closely with the laboratory researchers to compare their computer-generated predictions with experiments.

According to Neaton, the team used computational methods based on parameter-free first-principles calculations and NERSC's Franklin system to test these hypotheses. First-principles methods are atomic-scale computational approaches with the ability to predict measurable properties of materials with good accuracy from scratch, i.e., through solution of the quantum mechanics of a system of interacting electrons in a field of nuclei. Using a new approach based on these methods, the electrical resistance of bipyridine-gold molecular junctions was evaluated in different conformations.

"Computing properties of bipyridine-gold molecular junctions related to its electrical conductance for different conformations using first-principles approaches is computationally demanding," said Neaton. "The high throughput and magnitude of the NERSC resources facilitated a highly interactive back-and-forth with experimentalists, allowing us to rapidly modify our calculations and compare with experimental results as they became available."

Jeffrey Neaton is Facility Director of the Theory of Nanostructured Materials Facility at the Molecular Foundry.

After the researchers had plugged away for more than a year, the story that emerged was surprisingly detailed: if bipyridine bonded at an angle, more current could flow through the junction compared with the bipyridine bonded in a vertical configuration. This suggests the conductance of bipyridine was linked to the molecule's orientation in the junction. In experiments, these scientists noticed when the final strand of gold atoms breaks and snaps back, the vertical gap is not big enough for bipyridine to insert itself in line, so instead it bonds at an angle. As the gap increases, the molecule jumps to a vertical configuration, causing the conductance to plummet abruptly. Eventually, the molecule straightens even more, and the contact breaks.

"Once we determined this, we wondered,'Could you reverse this behavior?'" said Su Ying Quek, a postdoctoral researcher at the Molecular Foundry who was involved in the theory development.

In experiments, Quek and Neaton were able to demonstrate why pushing the junction to an angle and pulling it straight could repeatedly alter the conductance, creating a mechanical switch with well defined on and off states.

"One of the fascinating things about this experiment is the degree to which it is possible to control the 'alligator clips,'" said Neaton. "For this particular molecule, bipyridine, experiments can reproducibly alter the atomic-scale interface between the molecule and its gold contacts back and forth to switch the conductance of the junction."

Quek and Neaton hope to refine and apply their theoretical framework to promising systems for solar energy conversion and multi-electron heterogeneous catalysis, where controlling charge dynamics at nanoscale interfaces is central.

"Understanding how electrons move through single-molecule junctions is the first step," said Neaton. "Organic-inorganic interfaces are everywhere in nanoscience, and developing a better picture of charge transport in hybrid materials systems will certainly lead to the discovery of new and improved electronic devices."

For more information about this research, please visit:
http://newscenter.lbl.gov/press-releases/2009/03/02/researchers-discover-a-potential-on-off-switch-for-nanoelectronics/