At this year's SC15  Conference, held Nov. 15-20, in Austin, Texas, a number of Berkeley Lab researchers were honored for their research and contributions to the field of high performance computing. Sponsored by the ACM (Association for Computing Machinery) and IEEE Computer Society, this international conference offers a complete technical education program and exhibition to showcase the many ways high performance computing, networking, storage and analysis lead to advances in scientific discovery, research, education and commerce.

Here's a roundup of all the Berkeley Lab staff honored at SC15: 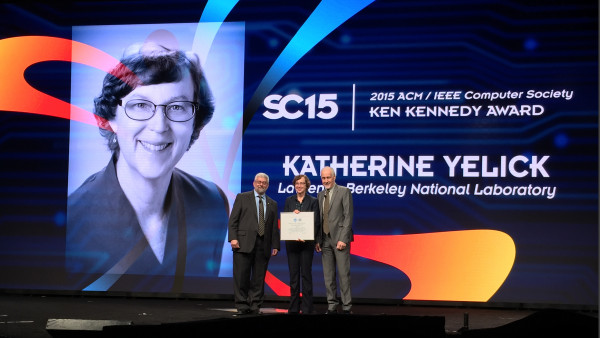 Kathy Yelick, Berkeley Lab's Associated Laboratory Director for Computing Sciences, was awarded the 2015 ACM/IEEE Computer Society Ken Kennedy Award for innovative research contributions to parallel computing languages that have been used in both the research community and in production environments. She was also cited for her strategic leadership of the national research laboratories and for developing novel educational and mentoring tools. 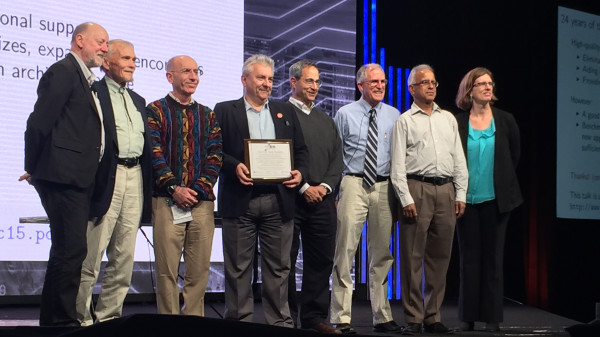 NAS Parallel Benchmark Team accepts the SC15 Test of Time award. Among those recognized were Berkeley Lab's Horst Simon (4th from the left) and David Bailey (6th from the left)

Since they were introduced at the SC91 Conference, the NAS Parallel Benchmarks became an industry standard and have been implemented in many modern programming paradigms. Research areas influenced by these benchmarks have broadened to include network design, programming languages, compilers, and tools. Google Scholar yields over 27,000 results for the NBPs, with about 7,400 citations since 2014. 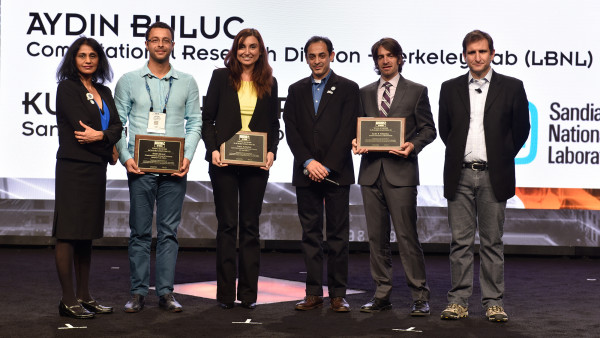 IEEE Technical Committee on Scalable Computing Award (TCSC) for Early Career Researchers recognizes up to 3 individuals annually who have made outstanding, influential, and potentially long-lasting contributions in the field  of scalable computing within 5 years of receiving their PhD degree as of January 01 of the year of the award. This year, Berkeley Lab's Aydın Buluç was one of the three recipients.

Buluç's research interests include parallel computing, combinatorial scientific computing, high-performance graph analysis, sparse matrix computations, and computational genomics. Previously, he was a Luis W. Alvarez postdoctoral fellow at Berkeley Lab and a visiting scientist at the Simons Institute for the Theory of Computing at UC Berkeley. Buluç received his Ph.D. in Computer Science from the University of California, Santa Barbara in 2010 and his B.S. in Computer Science and Engineering from Sabanci University, Turkey in 2005. He was recieved a DOE Early Career Award in 2013, and is also a founding associate editor of the ACM Transactions on Parallel Computing. 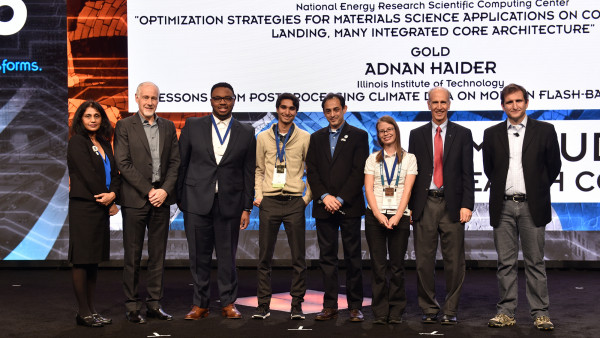 Luther Martin (3rd from the left), a NERSC Student Assistant via the UC Berkeley TRUST-REU program, accepts the silver award in the ACM Research Competition for Undergrads.

Luther Martin, a NERSC Student Assistant via the UC Berkeley TRUST-REU program, won the silver award in the ACM Student Research Competition for undergrads for his poster on "Optimization Strategies for Materials Science Applications on CORI: An Intel Knights Landing, Many Integrated Core Architecture." Martin, who currently attends Jackson State University in Jackson, Mississippi, spent the summer interning at NERSC. He was one of 25 students selected to present their posters at SC15 out of 64 submissions. Read more. 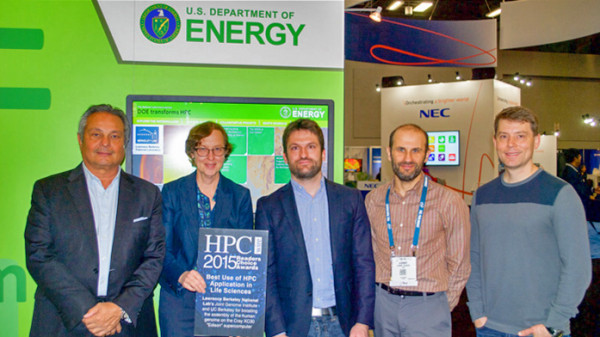 A team from  Berkeley Lab Computing Sciences, the Joint Genome Institute and UC Berkeley won HPCwire's 2015 Readers Choice Award: Best Use of HPC Application in Life Sciences for their work in genome assembly. The team used 15,000 cores on the Cray XC30 “Edison” supercomputer to boost the complete assembly of the human genome, bringing the time down to 8.4 minutes. HPCwire readers note that this is an impressive application of modern parallel algorithm design and programming—tools that generally will be critical to the optimal use of HPC systems to solve large-scale problems that benefit society.